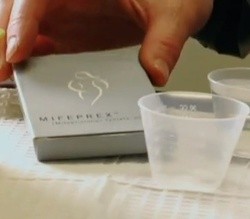 The Missouri legislative session ended last week and one of the many successes the state GOP is celebrating is the passage of a bill to add restrictions to the "abortion pill." It's one of several Republican initiatives that Planned Parenthood is now slamming in the aftermath of the session. It's no surprise that these organizations are at odds with the Republicans at the Capitol, but now they are turning their attention to Governor Jay Nixon, who has the authority to veto the anti-abortion bill.

A key question, too, is whether the GOP representatives could override Nixon even if he opposes their efforts.

"It was a shame and a disappointment this year," Paula Gianino, president of Planned Parenthood of the St. Louis Region and Southwest Missouri, tells Daily RFT.

Republicans, of course, see it quite differently.

One thing both sides seem to agree on: The bill could limit the number of abortions in Missouri.

The most controversial bill related to abortion access is House Bill 400, which the House and Senate both overwhelmingly approved last week. The state GOP in its press release on the bill's success praises lawmakers for approving "vital life-protecting legislation this past week that will ban webcam abortions and require a doctor to be present at the time she begins the RU 486 abortion."

The bill focuses on RU-486, also referred to as mifepristone, or any other "abortion-inducing drugs."

Supporters of the legislation say there are currently not enough restrictions on this process in the state -- mainly that women are not required to be in the presence of doctors at all stages.

That's why they commonly refer to the practice as "telemedicine" or "webcam abortions."

But groups like Planned Parenthood say it's much more complicated and that the new restrictions, if approved by the governor, would actually make it impossible for some women to access this service altogether. They emphasize that is proven to be safe and effective.

According to Planned Parenthood, the process requires two pills and it is standard practice for women to take the second one in the comfort of their own homes, sometimes days after the first pill. There's no medical reason why they need to return to the doctor or clinic for this step -- and given the lengths some women have to travel, it can be burdensome and even dangerous for them to be in transit during this period, the group argues.

Supporters of the bill, however, present it as an important women's health measure.

"The passage of HB 400 is a victory for the lives of unborn babies and the health of women in Missouri," State Rep. Jeanie Riddle, the bill's sponsor, says in a statement. "It will limit the number of abortions in our state by making it more difficult for abortion clinics to push chemical abortions without having an abortionist on staff at their facility. This legislation will keep accountability and responsibility on doctors to be physically present to offer care both before and after the administering of an abortifacient and not just dole out drugs while sitting behind a computer."

Continue for more response from the GOP and for the full statements and bill.