Pokémon Loose in Crestwood: Catch Them! 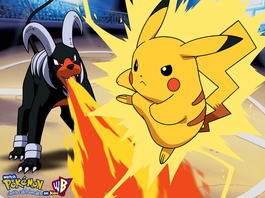 image via
It appears to be puking fire. They must be caught and stopped.
Rumor has it that there's a herd of wild Pokémon loose in Crestwood.
You know what you need to do.
You gotta catch 'em.
You gotta catch 'em all.
In order to catch 'em all, as the kids in the early aughts said, you'll have to show up at 10 a.m. December 18, at Yeti Gaming in Crestwood Plaza. That's where those rascals will be. Coincidentally, that's the same time and place the Play! Pokémon Championship Series will be holding its Crestwood event, a qualifier for the August 2011 World Championships.
Click behind the jump for a bonus video (not for "elipitics," the info warns!) and the hilarious breakdown of age categories for the tournament.
The competition will be split into Juniors, Seniors and Masters, cut off by age level. Juniors are born 2000 or later (as in, ten years old or younger) and Seniors must be born between 1996 and 1999. That means that to be a Master, you must be born 1995, or earlier.
Friends, meet your 15-year-old Masters in just a short week and a half. Prepare yourselves.
And, just in case you forgot what, exactly Pokémon are (since they were actually popular, you know, a decade ago), or you just want to see if you can give yourself a seizure, here's a short video presentation that left a bunch of Japanese kids seizing on the floor in the newsreels of forever ago. Ahhhh, memories.