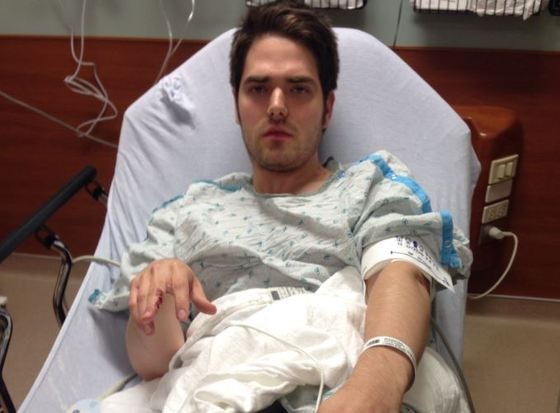 The attack on Chris Schaefer during a strategy meeting last month at Greater St. Mark Missionary Church has resulted in charges -- second-degree robbery, a Class B felony -- for four Ferguson protesters.

The charges stem from the theft of Schaefer's iPhone and charger on November 6. Schaefer, a 22-year-old University of Missouri-St. Louis student, told police that during the meeting several protesters accused him of livestreaming the private gathering. He says they beat him, stole his phone and dragged him outside church, where he was able to run away and call 911. He was later treated at a hospital.

It's worth noting that a second-degree robbery charge is defined as when a person "forcibly steals property and in the course thereof causes physical injury to another person," which explains why police didn't seek separate assault charges.

St. Louis County Police Department spokesperson Shawn McGuire tells Daily RFT the suspects were identified in a photo lineup by Schaefer and at least one other witness, and that detectives are currently looking for a fifth suspect. The four currently charged are: Allen Anthony Frazier Jr., 27; Melissa C. McKinnies-Sanders, 39; Brandi Shields, 17; and Lynard A. Smith, 33.

The charges appear to support the previous claims of Patricia Bynes, a Democratic committeewoman who was present at the meeting. She had accused members of the Lost Voices protest group of instigating and leading the attack, but when Daily RFT first spoke with Schaefer, he said he wasn't sure if the people who attacked him were members of the group. However, in a more recent interview, Schaefer reveals that he does believe "a few" of the people who attacked him were Lost Voices.

The St. Louis Post-Dispatch, which interviewed McKinnies-Sanders on Thursday, reported that all four people charged are members of Lost Voices. McKinnies-Sanders, a founder of the group, disputed the charges.

"We're being targeted because we're the ones out here with Lost Voices pushing this movement," she told the newspaper. "That wasn't me. Nine or ten people ran out of the church after him, and I wasn't one of them."

Schaefer spent much of the last month recovering from the beating that followed the theft of his phone, which was later returned. He says his injuries resulted in a $3,166 hospital bill, and he's attempting to offset the costs with a GoFundMe campaign. Though he did venture out to livestream demonstrations following the grand-jury decision not to indict Darren Wilson for killing of Michael Brown, he says he's still wary of the other the protesters.

The lack of a direct apology from the those present during the attack continues to weigh on Schaefer, and he says he's grown suspicious that the accusation that sparked the beating and theft -- that he was livestreaming the meeting -- was simply a pretense. He says he still wonders if he was targeted over rumors that he was undercover cop, or just for being white.

"Some people think it was premeditated, that the attack on me would have happened regardless and the phone was just an excuse," he says. "I think that that might be true."