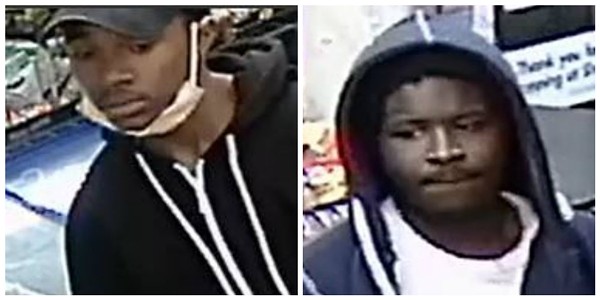 IMAGES COURTESY OF SLMPD
These two men have been identified as "persons of the interest" by St. Louis police.

St. Louis police are asking for help in identifying persons and vehicles of interest after a double shooting at a Dutchtown gas station parking lot last night left one man dead and another injured.

Police say a 28-year-old black man was found lying in the parking lot at 3934 South Grand at 11:02 p.m. last night. He was later pronounced dead at the scene.

The man's identity is being withheld pending notification of his family.

Another victim, a 26-year-old black man, was apparently also shot at the scene — a Shell station at the corner of South Grand and Alberta — and transported to the hospital. Treated for multiple gunshot wounds, he is currently in critical/stable condition.

The police "investigation revealed a large group of subjects were involved in a verbal altercation on the parking lot when gunshots were fired," the police said in a statement.

Anyone who can identify any person or vehicle shown in the photos is urged to call CrimeStoppers at 866-371-TIPS (8477). All calls are anonymous.