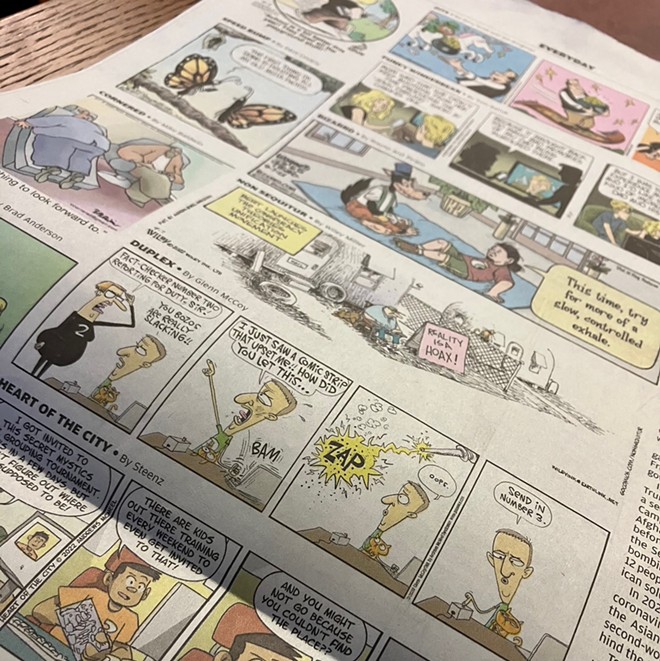 SARAH FENSKE
The good old days: Until last week, the Post-Dispatch ran two full pages of color comics. Now it's down to a half-page in black and white.

Last week, St. Louis Post-Dispatch Editor in Chief Alan Achkar did the one thing newspaper editors are cautioned never to do unless they're ready for a pitched battle: He messed with the funny pages.

As Achkar explained in a front-page story on September 13,  the daily was switching to a model in which comics are chosen by its corporate owners in Iowa, not local editors. "Our company, Lee Enterprises, is moving to a uniform set of offerings for its newspapers, with new strips and columns that you haven’t typically seen in the Post-Dispatch," Achkar wrote.

Gone were longstanding strips such as Beetle Bailey, Dilbert and Mutts. Gone, too, were the two full pages of color strips that the Post-Dispatch used to run. Instead, like the other 76 papers in the Lee chain, the paper now offers only one half page in black and white for every day but Sunday — a drop from 34 comics to only 10.

Unsurprisingly, many readers were not happy. Some even canceled their subscriptions.


Hey @stltoday, the new comics selection is terrible. For a major U.S. newspaper, you have really gone downhill.

FFS @stltoday… This is sad. Cutting two pages of comics down to a measly half page bad enough, but then you go and waste that tiny bit of real estate with comics that are reprints… Just kill the section entirely if this is the best you can do. 😡😡😡😡😡 pic.twitter.com/fEDVoAwEpF

I’ve seen the paper get more and more expensive and offer less and less every year. They got rid of @GailPennington’s Tube Talk column. They moved @DNemanFood and outsourced the food section. Still, we wanted to support local journalism.

But @LeeEntNews killed the funny papers last week. We went from having two full-color pages of comics to a half page of black and white ones, some of which haven’t been new in decades. So there’s no more reason for me to get a paper copy of the Post.

Canceling the paper because they cut the funnies may seem like an overreaction, but I can’t justify the cost anymore. I’ll still subscribe & read the local news online, & I hope the Post can continue to cover important local issues. But I don’t think that’s the way this is going.

Tracy Rouch, a spokeswoman for the Post-Dispatch, declined to share the number of canceled subscriptions or comment on reaction to the changes.

Beyond St. Louis, Lee's big shakeup led the creator of the Dilbert strip, Scott Adams, to announce he'd been "canceled" in 77 papers. He later made clear it was all one company's decision but not before conservative fans erupted with cries that "the woke" had come for him — and critics mocked him for the apparent attempt at martyrdom.


Dilbert wasn't "cancelled." Lee Enterprises Inc., the parent company of those 77 papers, downsized all its comics pages to the same 10 strips. Dilbert didn't make the cut.


Adams doesn't seem to be backing down. This morning, he shared a Bloomberg story about how his strip had become "the voice of the ESG opposition," tweeting archly, "The timing of Dilbert getting cancelled by 77 newspapers (one large chain) is probably a coincidence."

Among the other comics getting killed in Lee's bloodbath were two locally drawn strips: Heart of the City, which is now drawn by St. Louis artist Steenz, and The Duplex, a longtime favorite by Glenn McCoy, who got his start as the editorial cartoonist at the Belleville News Democrat before becoming Hollywood's go-to guy for animated movies.

In the early 1990s, when The Duplex earned national syndication, the Post-Dispatch was one of the first papers to carry it. 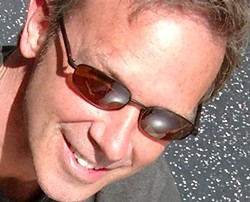 VIA GLENN MCCOY
Glenn McCoy is the creator of the comic strip The Duplex, which the Post-Dispatch recently cancelled after a nearly three-decade run.
McCoy didn't even realize his  hometown paper had canceled The Duplex until a reporter reached him on his cell phone yesterday and inadvertently broke the news.

McCoy was apologetic about not being up on the latest. "I don't see the Post-Dispatch except in coffee shops," he said, noting that he wasn't a subscriber and adding, jokingly, "and I'm not going to start now."

For McCoy, the Post-Dispatch's new "uniform set of offerings" feels like a familiar, and dispiriting, trend. "All these newspapers are being homogenized into basically one newspaper," he observed. "It's going to be one newspaper with different mastheads."

Even so, he said he bears the daily no ill will. For all the corporate owners who are moving away from his strip, others seem to be picking it up. Or so he assumes; his wife runs that side of things. "She hasn't given me any concerned looks, so I think I'm OK," he says.

Adds McCoy, "When I was just starting out, I kept a keen eye on my client list, like being a day trader watching the stock market. I stopped doing that." He's hopeful that people who love comics can find what they want with the subscription services now offered by syndicates, which basically allow people to build their own comics page and read it online.

But while that's all well and good for someone who already loves comics, what about the new readers that newspapers used to introduce to the medium?  And what about the readers who fell in love with newspapers through comics?

The Post-Dispatch's editor is apparently one of them. In his column announcing the comics changes, Achkar writes about being drawn into newspapers as a kid in Cleveland through the Plain Dealer's funny pages — reading Peanuts and Hagar the Horrible before finding himself paging through to sports and then news. It's not an unusual path (even if many comics readers become mere news readers, not editors in chief).

As Achkar acknowledged in his A-1 column last week, the changes are a question of cost: "The company’s goal with these changes is to make sure it can still devote resources to local news coverage and strong journalism." Hedge fund Alden Global Capital earlier this year was blocked in its attempt to purchase Lee Enterprises, but is likely still lurking. Lee, and the P-D, have good reason to keep costs down.

Even so, there's a cost to that cost-cutting. And that's what has Glenn McCoy worried as he contemplates the future.

"The comics page is a gateway to the rest of the newspaper," he said.

Now the Post-Dispatch is offering a smaller gateway for new readers — and a far less colorful one at that.

Sarah Fenske is the executive editor of Euclid Media Group, overseeing publications in eight cities. She is the former host of St. Louis on the Air and was previously editor-in-chief of the RFT and the LA Weekly. She lives in St. Louis.
More
Scroll to read more St. Louis Metro News articles (1)
Join the Riverfront Times Press Club