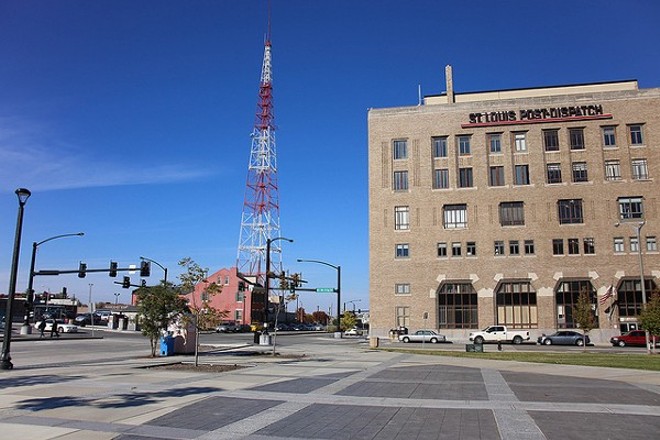 Last week, St. Louis Post-Dispatch reporter Mike Faulk put in his notice, saying he'll be moving back to Washington state after a high-profile stint at the daily that included being arrested covering protests last September.

But yesterday, the paper sped things up — they laid him off.


Faulk was among five newsroom layoffs yesterday. Samantha Liss, who covers the healthcare industry, was also among those let go, as she tweeted last night.

I was laid off today. There's a chance I could be saved through the buyout process. I'm really proud of my most recent work on air ambulances and I'm happy for the families whose massive bills were overturned. #journalismmatters


Liss is the reporter behind the P-D's recent attention-grabbing work on the high cost of air ambulance bills, which led to calls for a federal investigation.

Depressing for @stltoday. Sam's stories make a difference. Her recent work on Mo. residents getting slammed w/ huge air ambulance bills has moved federal & state lawmakers to action https://t.co/PRmwzUNOTQ Hopefully her job will be saved in a buyout. If not hire her, she's great https://t.co/TEl7KADpm5

Crushed to hear this. Samantha Liss has been doing valuable work in a crucial area of coverage. https://t.co/ZJU9iwJbZq


Tracy Rouch, the paper's spokeswoman, characterized the layoffs as "a workforce reduction" and confirmed that five newsroom jobs were affected.

Yet as Liss' tweet indicates, yesterday's layoffs are not necessarily the end of the story for those affected. If other newsroom staffers decide to take buyouts, they could yet keep their jobs. That happened to Liss in a previous round in 2015, when P-D columnist Bill McClellan and eight others opted to retire and save their colleagues' jobs.

We're still trying to learn who else was affected; we'll update this post as we learn more.

As for Faulk, adding him to the layoff list saves the job of someone who is planning to stay on at the paper. But, as he tweeted last night, it still moved up his day of departure — he'd been planning to work through July 1. Instead, his last day was yesterday, June 18.

I put in my resignation last week. Today I was laid off and it was, you know, unexpected.

So today was my last day as a Post-Dispatch reporter, two weeks early.

Hey, the rest of the 21st Century begins tomorrow.

Sports columnist Jose de Jesus Ortiz confirms that he is among those laid off yesterday, but says he had already been in the process of moving his family back to Houston, where he previously worked the Astros beat for the Houston Chronicle.

"I feel for the people who were laid off," he tells us via direct message. "I believe in the Post-Dispatch and support their product. I will cheer them on from Houston. I will announce my new gig in the next two days with a digital news company."

Three sources tell us the other two layoffs are photo editor Hillary Levin and Bryce Gray, who covers energy and environment for the daily.

However, we're also told that at least one job will be saved. Editorial page writer Deb Peterson recently asked for a buyout, and that move appears likely to save one job. Because of rules governing seniority, it seems likely that will be Samantha Liss.

Doug Moore, secretary of the executive board of the United Media Guild, which represents most newsroom employees, expressed sadness over the talent lost in the layoffs. The paper's owners, Iowa-based Lee Enterprises, took on a huge debt load to achieve its acquisition, and cuts have been a semi-regular occurrence ever since.

"It's always difficult to lose members of our accomplished newsroom at the hands of budget cuts that began thirteen years ago with the sale of the Post-Dispatch to Lee Enterprises. With these layoffs, out the door goes expertise to cover complex issues such as the business of health care and the environment and energy," Moore said in a written statement. "The Post-Dispatch continues to be, by far, the largest newsroom in the St. Louis region and is the go-to website for the latest happenings in the St. Louis region.

"But, yes, these cuts are painful. We are not only losing talented colleagues but friends. With each round of layoffs comes anxiety and morale drops. For those who complain that the Post-Dispatch 'is not what it used to be,' put your money where your mouth is: Go to stltoday.com and subscribe. Support local journalism."

Editor's note: A previous version of this story provided the wrong title for Deb Peterson. We regret the error.