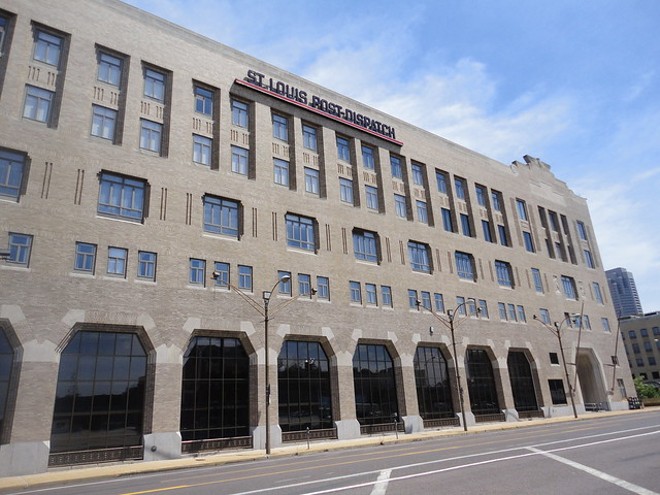 Joel Currier, the daily's courts reporter, was covering the case of Antonio Taylor, who stands accused of shooting Ballwin officer Michael Flamion in the neck during a July 2016 traffic stop. Psychiatrists working for the state had found that Taylor was incompetent to stand trial — a conclusion Taylor was challenging.

At that point, Currier left the courtroom as ordered. But instead of leaving the premises, the court says in a press release, he stood with his ear to the door and live tweeted "what he was able to hear."

In an April 12 tweet, Currier appeared to acknowledge doing just that.

"After Judge Nellie Ribaudo closed courtroom to the public — i.e. one lone reporter — I spent most of the afternoon with my ear to the door live tweeting details," he wrote on Twitter. "(Glamorous life of a print journalist.) Wouldn't have bothered tweeting had I been allowed to stay. #democracy."

That tweet has since been deleted, as well as any others detailing the testimony that day. (It's not clear whether Currier did in fact tweet details or only tweeted that he had; Currier referred our requests for comment to the Post-Dispatch. The paper's statement appears below.)

But Currier's tweet did not go unnoticed by the court. A screenshot was included in the press release announcing the judge's order.

In the release, the court noted that Currier signed the contempt order last Wednesday, "admitting he willfully and intentionally violated Judge Ribaudo’s order, Missouri Supreme Court rules and the newspaper’s own professional standards on the use of social media. Currier also acknowledged that he had violated the court’s trust."

In closing the hearing to the public, as well as in the contempt order, Ribaudo cited the state statute governing mental competency hearings. The law notes that "the result of any examinations made pursuant to this section shall not be a public record or open to the public" and also notes that reports made by psychiatrists in such cases should not be open to the public.

“Although the press and the public have a right of access to criminal proceedings, that right is qualified and must be carefully balanced with a defendant’s rights to a fair trial,” Judge Ribaudo wrote in her order. “Not only does the court seek to correct the behavior of Mr. Currier, but the court has to work toward learning if Mr. Currier can be trusted to not violate future court orders and the Missouri Supreme Court Rules. Trust takes years to build, seconds to break, and forever to repair.

“Unfortunately, the court cannot fully know how Mr. Currier’s violation of the court’s order may have on the underlying litigation which Mr. Currier tweeted about, nor can Mr. Currier rewrite history. In crafting this resolution, the court is keenly aware that it is unable to ensure the violations of Mr. Currier will not impact the ability for the parties to have a fair trial.”

Instead of jail time or a fine, Ribaudo wrote, Currier will have to write letters of apology to the defendant, the victim and their lawyers.

But don't think for a minute he's getting off easy. Per the release, he will also have to "participate in an educational program with court staff about issues relating to freedom of the press and the right of parties to litigation to have a fair trial."

In a statement, Post-Dispatch Editor Gilbert Bailon said, "The quality of Joel’s reporting and ethics are beyond question. On this occasion, he was wrong and he admitted he was wrong, submitting a letter of apology to the court long before any order that he do so.

"His error was borne of frustration by occasions reported in this newspaper and the Riverfront Times, where matters that should be conducted in open court and records that should be publicly available are not. In fact, in the very same case that prompted Joel’s actions, the court order finding the defendant incompetent to stand trial and the entire case file was closed to the public. It was made public only after disclosure by the prosecuting attorney and reported in the Post-Dispatch."