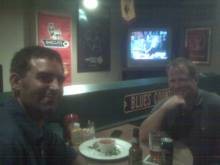 Albert Samaha
"Stimulus has become a bad word," says Lasky (left).
Last Monday in his jobs speech, President Barack Obama made a serious effort to wrest control of the Narrative away from the Republicans.

All this came to a boil during the debt-ceiling debate, and Obama has since learned his lesson. Now he is telling stories the way he did in '08. Now he is recognizing the importance of the Narrative.

In the speech he explained that the $447 billion American Jobs Act will spur the economy through a variety of mechanisms: tax cuts for workers and small businesses who hire, with added cuts for hiring veterans and the long-term unemployed; investment in infrastructure -- from roads to schools -- to provide jobs for construction workers; and funding to prevent teacher, police, and firefighter layoffs.

A major goal of the speech was to highlight the tools the government has to improve the economy, to dispel the growing notion that the government needs to just get out of the way and let the Free Market correct itself.

But did his message resonate?

In this week's edition of Of the People, we headed over to Barrister's in Clayton to find out.

And if the patrons there are any barometer, the answer is a resounding "No." Or at least (Democrats hope), "Not yet."

Three men in ties and rolled up sleeves sat around a round table drinking Happy Hour drafts. When asked their thoughts on Obama's job's plan, one man leaned back in his chair, grinned and shook his head. Another man suppressed a smile while sipping on his drink and looked over at the third man who let out a firm chuckle and said, "Too little, too late." They didn't want to comment further, but they didn't have to.

Their sentiments where echoed throughout the bar.

"I think we've tried this, we've been down this path before," said Bryan Schwartz, who works in finance. "I don't see how another stimulus package is gonna create jobs when there's all this uncertainty for small businesses."

"Stimulus has become a bad word," added his friend Brook Lasky, an attorney.

Schwatz asserted that small businesses are scared to hire right now because of a sense of uncertainty caused by too many regulations, the new health care plan and the possibility of increased taxes.

This perspective suggests that, as liberals across America have opined, the president waited too long before firmly proclaiming his economic vision. The Republican Narrative had already framed the debate; to many voters, Obama comes off like the guy who shows up to prom an hour late then gets mad at his date for dancing with somebody else.

As Lasky noted, there is a perception that the stimulus plan failed, even though the Congressional Budget Office (as well as most economists) conclude that it pulled America out of the recession and nudged economy back into growth, increasing the number of people employed "by between 1.2 million and 3.3 million," and raising GDP "by between 1.1 percent and 3.1 percent." And yet the popular perception gives Texas Governor/presidential candidate Rick Perry the confidence to say that the stimulus created "zero jobs."

Seated at a table across from the bar, David Wrone, who works in public affairs, stated that "governments don't create jobs. Government is not an industry."

"Pouring trillions of dollars into make believe jobs is not going to do anything for the economy," he said.

While Wrone and Schwartz agree with certain aspects of Obama's plan -- tax cuts for small businesses and middle class workers -- they vehemently opposed the greater philosophy the president sought to convey: that government spending more effectively boosts a struggling economy than government shrinking does.

The shrink-the-government proponents appear to be multiplying even though more than half a million of the jobs lost in the past three years were in the local government sector, a direct result of budget cuts. But perhaps the true vindication of Republicans' ability to inject a message is the current popularity of deregulation, which led to the Wall Street and housing market failures that caused the recession in the first place.

The Democrats' path to maintaining the White House relies on at least one of three realities: the economy turns around before November (implausible at this point), swing voters believe in Obama's economic vision more than the Republicans' (possible), the GOP nominates a sufficiently weak challenger (increasingly the likeliest of the three).

Some voters, like Wrone, though, have already made up their minds. He doesn't really like anyone in the current Republican field, but he'll check the box for whoever is going up against the incumbent.

By establishing their message more effectively, Republicans have changed the fundamental question of the economy. Instead of "How did this happen?" the focus is on "Why are we still here?" Consequently, Obama's policies are taking the blame for the recession he inherited while the policies of the president before him fade into history.