Next Tuesday, October 11, is the start of 2011's St. Louis Fashion Week. For the seventh year, Brown Shoe will be presenting Project:Design!, a competition featuring the work of six designers based out of, or near, St. Louis.

The lines of the top six designers, chosen online by the public, will be featured in a fashion show October 11 at Fashion Week. Judges will then choose a winner, who will receive prizes including a consultation with 963Collective and coverage in ALIVE Magazine.

Daily RFT is highlighting one finalist each day until October 11, showcasing the best talent this area has to offer. 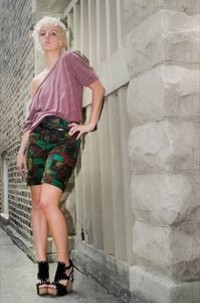 Stephen Curd, 27, attended school in St. Louis and now lives in Chicago. His company name, Garic Stephens, is a mix of his last name and an anagram of his middle name, Craig.

Along with St. Louis, Stephens was also invited to participate in the Chicago Fashion Week on October 23, where he will be presenting the same line as in St. Louis.

When did you know that you wanted to pursue fashion design? I originally went to school for radiology and I was very unhappy. I got three years into that program before I realized it wasn't for me. So it's been a bit of a roller coaster. I've always been on the creative side and I just found my niche in design. Everything just fell into place and it seemed right for me.

What is your design style? Androgynous--I use cuts and styles for both men and women. All my jackets can be worn by both. I use a very tailored, European cut that both the sexes can wear. I used to cater just to men, but in this industry you have to be versatile, so I branched out and joined the two. What sorts of things inspire you? I'm mainly inspired by different music genres. The basis of most of my collections were inspired by a certain song. I would hear it and be so inspired by it, then I would keep listening to it during the whole show. Certain songs just reflect the flow of it, the attitude of the pieces.

I also get inspiration from different magazines like Vogue and previous design shows, which I incorporate in a lot of designs of my own.

What is the process like when developing new design ideas? My process is a little backwards. I do my fabric shopping first. I'm a very hands-on, very visual person, so I'll go to the fabric store and be that person feeling everything and even putting things to my face. I do that and it helps me visualize how the fabric will go with other things, and I go from there.

How are you feeling about 'Project:Design!'? I'm so excited--I've almost completed all my designs. I'm almost over-excited at this point. I'm ready to show my line. Do you feel any added pressure because you're the only man in the competition? No, not at all. I feel like I have a one-up on the others. I've been in fashion for a bit longer than the other girls. I've been able to travel more and get more experience. But I'm excited to see what they have, too. What do you think sets you apart from the others? I've noticed a lot of the designers just do women's wear. I feel like I have a versatility to me that the other girls don't have.

We're all different designers. I just know who I am and what I like, so that's what I try to bring in to every collection I do. 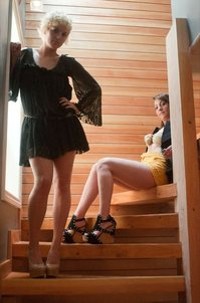 What do you hope to get out of Fashion Week? I've recently been picked up by a few boutiques in Chicago. My goal for 2011 is to get picked up in St. Louis. I'm ready to get into the fashion world and hit it hard. For Fashion Week I just want to make lots of connections, basically.

What would you like to do in the future? I love Chicago. I would like to open my own boutique in Chicago and in St. Louis and New York, as well. That's in my five-year plan. Then, seven years down the road, I want to go to Fashion Week in New York. It's so expensive, though.

I haven't stopped since I graduated. That's the kind of person I am. If I want something, I'm going for it.

What would you like people to know about you? I've learned to just stick to my guns. I just really want people to see my pieces and know it's Garic Stephens. I want them to know my cuts.