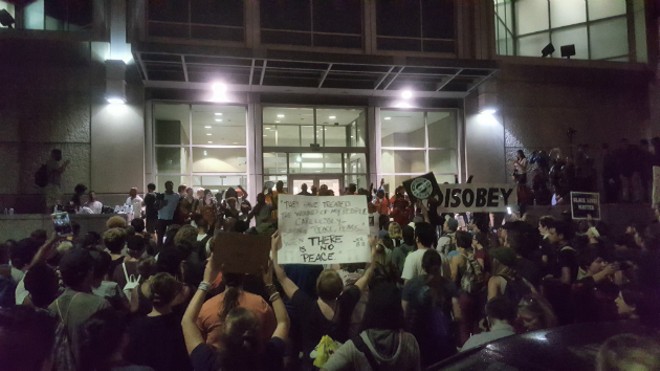 PHOTO BY DANNY WICENTOWSKI
Protesters gather outside the St. Louis Justice Center.
Following mass arrests on Sunday night in St. Louis, protesters have abandoned plans for another demonstration in the Delmar Loop and are instead gathering outside the city jail where people were still being released this evening.

Metropolitan police arrested 123 people Sunday on the third day of protests, which were sparked by the acquittal Friday of ex-cop Jason Stockley on a murder charge.

Chief Lawrence O'Toole acknowledged that the day's protests, which began in front of the police headquarters, were peaceful, but he claimed that a band of "criminals" hit the streets later, smashing windows and running amok.

At an early morning news conference with Mayor Lyda Krewson the chief bragged that his officers took control and "police owned the night." He estimated at the time that the number of arrests totaled more than 80, which turned out to be correct in that it was definitely more than 80.

Police provided a list of the 123 people tonight. All but three of them were charged solely with "failure to disperse."

Those arrested included Post-Dispatch reporter Mike Faulk, who wasn't released until this afternoon. In his final tweets before he was taken into custody, he wrote that police had penned them in on all four sides. That matched reports from others who claimed police swarmed in and arrested people without allowing them an exit route — a tactic sometimes called "kettling."


Less than 100 of us including media blocked in at wa and Tucker all four sides. People moving toward bike cops looks like best option

In the Delmar Loop this evening, an estimated 100 or so protesters had arrived by about 7 p.m. But before they could even get started, organizers told them there was a change of plans — they were to get back in their cars and reconvene outside the city Justice Center, which sits at 200 S. Tucker Blvd., in downtown.

"Market and Tucker," the crowd chanted before clearing the Loop.

By 7:40 p.m., between 200 and 300 people had arrived at the Justice Center. Organizers called on demonstrators to stay out of the street and asked them not to cross barricades near the jail so as to avoid a police confrontation.

"This is strictly occupying and solidarity to get our people out," an organizer called out on a bullhorn.

Demonstrators were taking up a collection to cover bail for those who were still locked up. It wasn't immediately clear how many people had yet to be released.

Heavy rains began a little before 8:30 p.m. The crowd had multiplied growing so large, it spilled out into the street. Some of them fled the weather, but hundreds stayed, holding up cell phone flashlights in the dark.

As the rain continued, the remaining protesters took shelter across Tucker in the entrance of City Hall. They chanted, "Free our people now." They stayed another hour or so until organizers called an end to the night.

Police reported at about 10 p.m. that Tucker, which officers had blocked between Clark and Market, had been reopened to traffic.

We will be updating this story with more details as the night progresses.