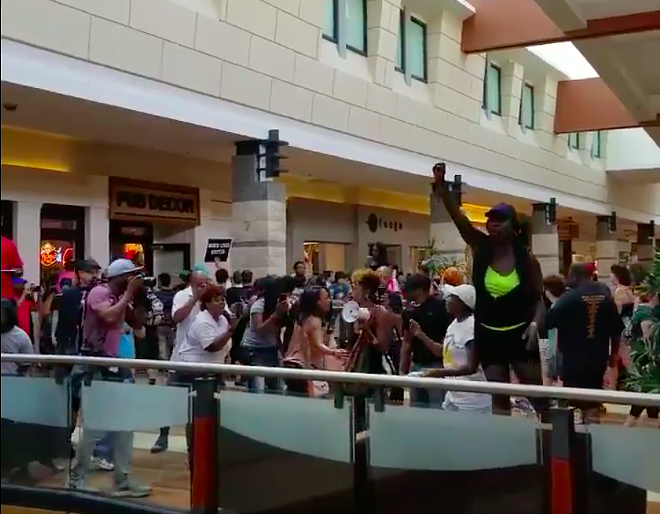 image via Twitter screengrab
Several hundred protesters reacting to the acquittal of former St. Louis police officer Jason Stockley briefly shut down the West County Mall this afternoon — with chants and protests as a large group marched through the indoor shopping center.

The mall is in Des Peres, about a thirty minute drive west of the city. The protesters first convened at Heman Park in University City, and after a peaceful protest there, moved southwest to the shopping mall.

Livestream captured by protesters shows a large group marching through the mall, shouting "No Justice, No Profits" and brandishing "Black Lives Matter" signs.


Other chants included "you can't stop the revolution."

There have been no reports of arrests or violence on the part of police or protesters. Reporters on the scene captured photos of cops standing outside the mall entrance around 1 p.m., temporarily closing it to visitors.


By 1:16 p.m., the mall announced via Twitter that it had reopened. "Protesters have exited the property without incident," the organization tweeted.

Protesters have exited the property without incident. The mall is now reopen for business.


The protesters immediately moved on to Chesterfield Mall. Livestream footage captured by those on the scene shows protesters laying on the ground of the mall, which is also in St. Louis' west county suburbs.

St. Louis has been gripped by protests since yesterday morning's acquittal of Stockley, a former police officer who had been on trial for murder last month. After Stockley waived his right to a jury trial, Judge Timothy Wilson was solely responsible for deciding the case. He issued a 30-page ruling early yesterday declaring the officer "not guilty," setting off protests in downtown yesterday morning and afternoon and in the Central West End in the evening.

Update 2:50 p.m.: After spending the early afternoon disrupting the status quo at two area malls, protesters made their presence known at Taste St. Louis, the long-running foodie event in Chesterfield.

Livestreams of the demonstration showed activists leading chants and walking through the festival space. The group was joined, briefly, by none other than Taste St. Louis co-owner Mike Kociela.

In an impromptu speech, Kociela extended a welcome to the demonstrators and said that he supported their mission. "There should be no difference in how anybody is treated," he said. "I personally want to be part of the solution. I'm glad you're here, you are welcome."

Later, a group of activists were given the opportunity to address the festival crowd directly from the event's music stage.

"We didn't come out to overtake or overthrow anything," said Cori Bush, a pastor and Ferguson protester, during her address to the Taste St. Louis attendees. "We came out because we want you to know black lives matter."

Editor's note: We've continued to update this post as the day has continued.

Sarah Fenske is the executive editor of Euclid Media Group, overseeing publications in eight cities. She is the former host of St. Louis on the Air and was previously editor-in-chief of the RFT and the LA Weekly. She lives in St. Louis.