After a life-changing experience in Mexico, one military spouse advocates for psychedelic therapy 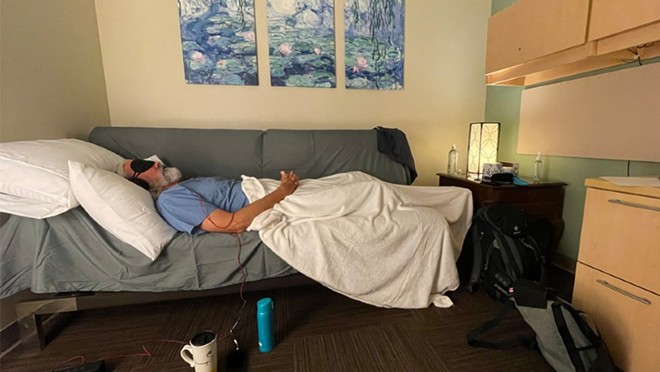 Nearly one in five American adults say they suffer some type of mental health concern. Approximately 75 percent of post-9/11 veterans and active-duty service members say they have experienced post-traumatic stress due to their military service. I have seen evidence of this first-hand.

I am a military spouse of 15 years. My husband served in the Navy as an explosive ordinance disposal for 20 years. Most of my husband’s career was spent attached to Navy SEAL Team Two and Navy SEAL Team Six where he bravely carried out more than 12 combat deployments.

We lost many friends in combat including a mass casualty in 2011 when a Chinook Helicopter was shot down killing all 31 friends and teammates on board. We lost others that were killed in action, in training or committed suicide.

My military community and I were constantly dealing with deployments, death and divorce. This eventually started taking a huge mental toll, and I began having major panic attacks. I was having suicidal thoughts and numbing with alcohol. I was depressed and constantly anxious that the ball was going to drop, and that my family would be the next one with that dreaded knock on the door.

Across the board in military families, I was seeing alcohol and substance abuse, marriages falling apart and again, even suicide. The special operations community, the best of the best, was silently unraveling behind closed doors.

In July of 2021, I was offered a life changing trip to Mexico along with six other special-operation spouses to explore Psychedelic Assisted Therapy. This treatment has not just saved me but so many others too.

In this type of therapy, the use of psychedelics is typically combined with talk therapy in a safe and controlled environment.

And military families are not the only ones suffering under this mental health epidemic and in need of solutions.

Psychedelic Therapy has been instrumental in my healing and has diminished the depression and anxiety that once consumed my life. So why is it largely unpracticed in the United States?

During President Richard Nixon’s War on Drugs, the government passed the Controlled Substance Act of 1970, making most psychedelic substances Schedule I drugs. Any substance under this regulation is deemed to hold no medical benefit and has a high potential for abuse.

Anyone skeptical of psychedelics can do a general Google search and find current research that indicates that the use of psychedelic substances can increase feelings of relaxation; improve a sense of well-being; and increase social connectedness, introspection and spiritual experiences.


Clinical research studies show that psychedelic substances have demonstrated positive outcomes in treating illnesses such as addiction, depression, anxiety and post-traumatic stress disorder. Furthermore, research shows these substances to be generally nonaddictive. When used in a safe and controlled environment, there is almost no concern for overdose, substance abuse or misuse. Many studies show that psilocybin, Ibogaine and DMT can help individuals beat addiction, specifically for opiates, alcohol and cigarettes.

Everyone knows that alcohol is a widely used and highly celebrated depressant drug here in the U.S. You can obtain an alcoholic beverage at almost any store, gas station, restaurant or social event. While alcohol is not categorized as a controlled substance, an estimated 95,000 Americans die from alcohol-related causes annually, making alcohol the third-leading preventable cause of death in the United States.

New data from the CDC estimates opioids were involved in 78,056 overdose deaths in the 12-month period ending in April 2021 (77.8 percent of all drug overdose deaths). But our lawmakers deem methadone, oxycodone and fentanyl safer than psilocybin, since you can obtain those drugs by prescription, and they’re all classified as Schedule II drugs. Meanwhile, psilocybin has extremely low toxicity and clear-cut evidence of medical benefit.

There are only three known deaths attributed to magic mushroom toxicity according to the scientific literature, and they may have involved other factors aside from psilocybin. Of the more than 12,000 people who reported taking psilocybin hallucinogenic mushrooms in 2016, just 0.2 percent of them said they needed emergency medical treatment — a rate at least five times lower than that for MDMA, LSD and cocaine. Despite the data, psilocybin has stayed a Schedule I drug for the last 50 years.

So, with all the new evidence surrounding psychedelic use in a controlled setting, why are we not pushing for the reclassification of psychedelic substances and for government funding for clinical trials? I suppose there is still work to do to rectify the bad reputation psychedelic plant medicines got in the ’60s and ’70s.

Thanks to efforts by Rick Doblin, the founder of MAPS (Multidisciplinary Association for Psychedelic Studies), there have been great strides in keeping psychedelic therapy safe, and it can undeniably assist in ending our mental health crisis.

Our laws need to be reexamined. We have a nation that is divided, depressed, anxious, addicted and exhausted. With so many years of overreach and government regulation, we have lost our individual power. We have lost our right to make informed and safe decisions regarding our own physical and mental health. What more needs to happen before our government realizes that the mental-health crisis needs to be approached with a radical new perspective and an open mind?