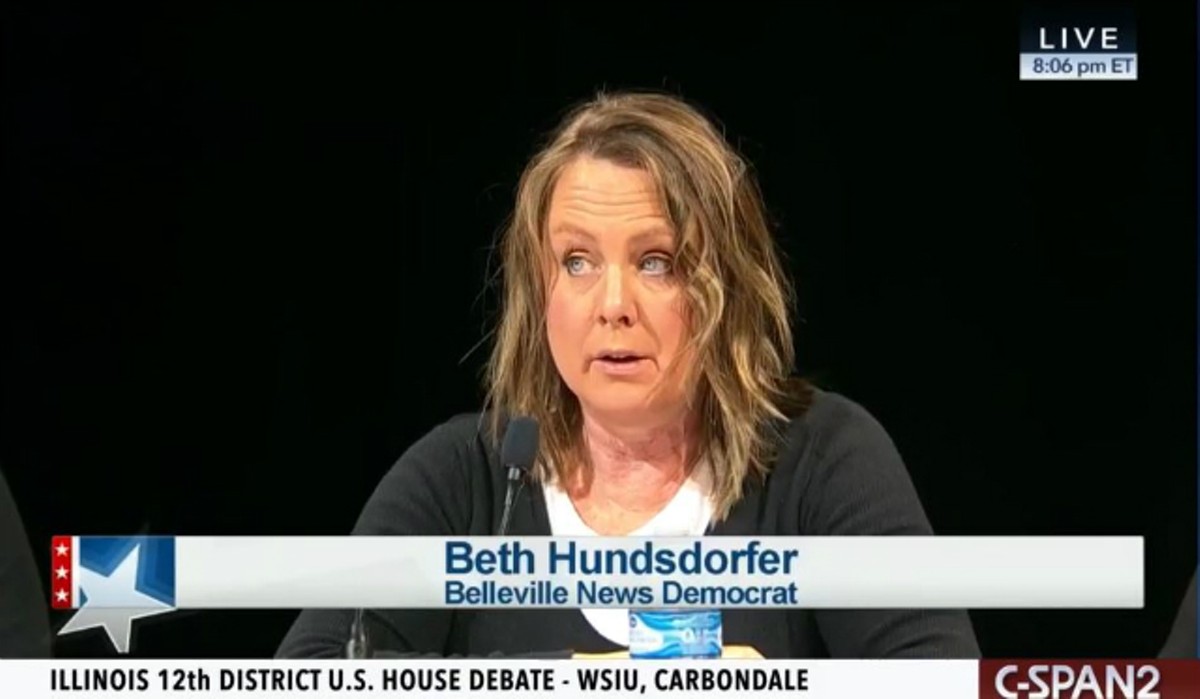 Beth Hundsdorfer, shown moderating a debate in 2018, has a reputation as a top investigative reporter. CSPAN

An award-winning investigative reporter who abruptly resigned last month from St. Louis Public Radio says she quit over the station's handling of her investigation into KDHX.

Beth Hundsdorfer, who built an impressive reputation as a newspaper reporter before moving to public radio, was preparing a story on allegations at the independent music station but left shortly before her piece, "Turmoil at KDHX," was broadcast on July 3.

"I didn't like the way the story was handled," she told the Riverfront Times on Friday in an email. "I quit before seeing the final edits."

Hundsdorfer did not respond to follow-up questions about her specific objections.

Accounts of problems at KDHX had been circulating for weeks. RFT Music Editor Daniel Hill had also been reporting on many of the issues, an investigation that culminated in this week's cover story, which explores complaints of former employees and current and former volunteers of mismanagement, including allegations of racial bias and insensitivity.

Hundsdorfer's story looked at some of the same issues. When it aired in July, KDHX's leadership claimed it was inaccurate in multiple respects.

In an email addressed to "KDHX associates," the station's board president Paul Dever called the story "a hit piece," writing that "the story played up the investigated, unsubstantiated employee complaints and some straight up lies," and complained that that it "played down or ignored any context we provided and in the serious manner with which we've treated the same complaints."

Dever's email went on, describing a July 5 meeting with St. Louis Public Radio representatives who, he alleged, admitted the story was error-riddled, and that even its reporting contradicted "the statements [the story] printed."

In response to questions from RFT, St. Louis Public Radio spokeswoman Madalyn Painter rejected Dever's description of the meeting, writing, "We didn't admit that our reporting contradicted statements, but we did own up to the shortcomings of some of the reporting and made the appropriate corrections and clarifications."

But Dever wasn't just upset about the perceived errors. In his email to the KDHX associates, he complained that Hundsdorfer's story misstated KDHX's financial situation — what the St. Louis Public Radio story initially described as "more than $3 million in the hole" — while also making it appear like KDHX was in a constant state of financial crisis. Dever suggested that the errors were "pretty galling" since St. Louis Public Radio "competes with us for funding."

Dever concluded the email to KDHX associates by noting that, following the July 5 meeting, St. Louis Public Radio made corrections to the story. Dever wrote, "I still don't agree with the corrected story, but it is better than it was."

He added, without embellishment, "The reporter who wrote it no longer works at St. Louis Public Radio."

Indeed, hours after the meeting with Dever on July 5, St. Louis Public Radio added an editor's note to the story, which explained that the piece had been corrected and, in some cases, "clarified" to reflect KDHX's policies and financial records. A comparison of the text of the original story and its corrected version show about a dozen changes, though most are fairly minor — and, more importantly, the corrections do not backtrack on the story's core reporting on the internal struggle over diversity within the station's ranks. The headline of the story was not changed.

For example: One change took a reference to "former employees" and changed it to "people." And the line about KDHX being "more than $3 million in the hole" that appears to have enraged Dever was corrected, and now reads "KDHX faces about $2.6 million worth of long-term debt, according to a 2018 financial statement."

"Our decision to pursue the story had nothing to do with consideration of who donates to our respective stations," Painter tells the RFT. "We do not share data with KDHX and are not aware of what, if any, overlap there is between our donors and theirs. What's more, our newsroom is editorially independent from our development (fundraising) and underwriting teams; we sometimes cover competing non-profit organizations, our own underwriters, and our university. The decision to cover the KDHX story was based purely upon on the newsworthiness of the allegations."

Regarding Hundsdorfer, Painter wrote only that "Beth resigned on July 3. She did not give a reason for her resignation." Whatever the reason, it was blow to the station's recent efforts to expand its offering of longform investigative journalism.

Hundsdorfer had spent more than two decades at the Bellville News-Democrat, the Metro East daily where she worked as part of an award-winning investigative team with reporter George Pawlaczyk. When she left the paper, she'd just completed co-reporting a five-part series that delved into the epidemic of gun deaths in East St. Louis, revealing the startling proportion of random shootings alongside a shockingly low number of solved cases.

After making the switch in January to radio, her byline appeared on fifteen stories, including pieces covering the fall of ex-St. Louis County Executive Steve Stenger.

The investigation into KDHX was her last story for St. Louis Public Radio. (She has since resurfaced as part of newly formed news site, the Metro East Meteor, run by her longtime reporting partner, Pawlaczyk.)

And because the world of media in the Metro area is small, we should add, in the interest of full disclosure, former RFT editor-in-chief Sarah Fenske accepted a job with St. Louis Public Radio while our cover story about KDHX was being reported. She edited that story but recused herself from editing this story to avoid a conflict of interest.