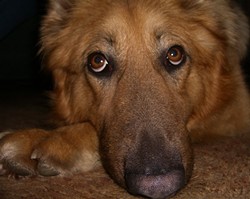 The dogs rescued lived among rodent droppings. Old and sick dogs had been shot to death.
Inspectors from the Missouri Department of Agriculture today removed more than 70 dogs from a Monett-based breeder in the first-ever enforcement of the state's new Canine Cruelty Prevention Act.

The facility was also cited for using gunshot as a means of euthanasia, a method which is not approved by the American Veterinary Medical Association or permissible under Missouri regulations.

Today Dr. Jon Hagler, director of the Missouri Department of Agriculture, credited the new law with helping his agency take a bite out of unlawful breeders. "There is more work to be done -- and now more resources to help," he said in a statement. "This cooperation among our animal care program, the Humane Society of Missouri and Attorney General Koster will help us increase rescues and prosecutions and continue to strengthen the breeding industry in Missouri."

The Humane Society of Missouri, Lawrence County Sheriff's Department and the Missouri Attorney General's office assisted the agriculture department in today's rescue. Dogs removed from the Monett facility were of of varying breeds, and include Cocker Spaniels, Labrador Retrievers, American Eskimos, Poodles, Beagles, Papillons and Brussels Griffons. The dogs will soon be placed with the Humane Society of Missouri for adoption.