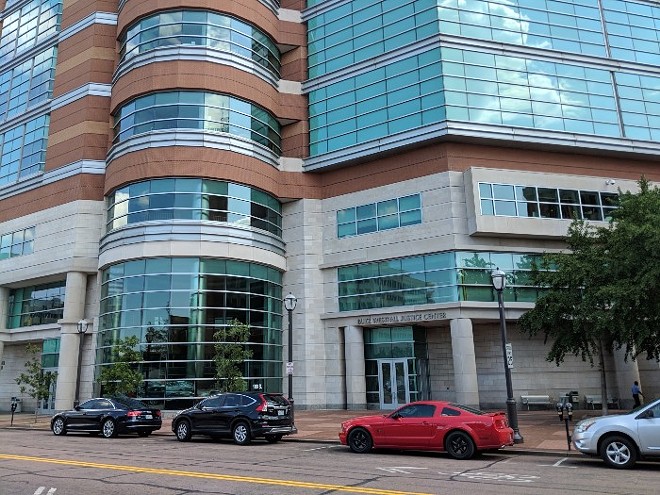 Criminal justice experts from around the country will take a hard look at St. Louis County's troubled jail for the next 18 months.

On Wednesday, County Executive Sam Page announced the county has received $300,000 from the MacArthur Foundation to deploy a racial equity study to improve the jail’s culture and reduce its population.

“Racism is a part of everything we see — we have to address that thoughtfully, intentionally,” Page says. “This process is going to help us do that.”

St. Louis County Jail has been continuously rocked over the years by accusations of excessive tasing and general mistreatment of inmates. In one incident, a a man says he was stripped naked and tased a dozen times by corrections staff. In July, a Riverfront Times investigation detailed a power clique of jail employees called “the family” who block reform efforts and perpetuate toxic work environments.

The jail's director, Scott Anders, became the fourth director of St. Louis County Department of Justice Services upon his appointment in November. He succeeded Doug Burris, who retired last year.

"Through the leadership of Scott Anders and his predecessor, Doug Burris, the culture of the jail has fundamentally improved, with more programming and educational opportunities for residents and more training and pay for employees," Page says. "This study will help us address racial inequities to create a healthier work environment for staff and improve relationships with jail residents as well as the outcomes for those residents once they leave our care."

Researchers from the University of Missouri-St. Louis, Florida State University and George Mason University will work with jail staff and residents to review policies, procedures and data on the culture of the jail. They hope to form new practices and policy innovations that criminal justice systems across the country could replicate.

The national eye has turned its attention on St. Louis’ racial inequities since the killing of Mike Brown, says Carrie Pettus-Davis, a researcher with Florida State University.

“Eight years ago, the country was looking at all the problems of St. Louis and trying to understand those problems and how they were playing out in their communities,” Pettus-Davis says. “Fast forward to today, and the country is looking to St. Louis for how to identify solutions around racial inequities.”

The grant for this study comes from the John D. and Catherine T. MacArthur Foundation, a Chicago-based organization that has awarded more than $6.8 billion in grants since 1978 to “address a variety of complex society challenges,” including justice reform and climate change.

The $300,000 funding for this study is only a small sliver of the MacArthur Foundation’s total contributions to St. Louis County.

St. Louis County was one of 20 jurisdictions nationwide that the MacArthur Foundation selected in 2015 to take part in its Safety and Justice Challenge Network to reduce unnecessary jail incarceration.

Last year, the MacArthur Foundation awarded $1.3 million to Saint Louis County and the University of Missouri-St. Louis to reduce the county jail’s population and eliminate racial inequities. In 2018, the county received $2.25 million for a similar goal. In 2016, the MacArthur Foundation gave $2.25 million to St. Louis County to target pretrial release programs aimed at resolving the disproportionate incarceration of minorities and residents from low-income communities.

Page described this year’s new study on racial equity as “the first of its kind.”

When asked what will be different this time around, Page said, “We are continuing on a trajectory to have real positive change within the jail.”

An earlier version of this story's subheadline incorrectly stated the name of the organization providing this grant. We regret the error.

An earlier version of this story incorrectly attributed an incident at the city jail as occurring in the county. It has been corrected. We regret the error.