Send a News Tip
That's the question being asked after St. Louis blogger Jim Hoft of Gateway Pundit posted a video on his blog yesterday taken from the website DiversityIsCrap.com.

Here are a few of the recent headlines at DiversityIsCrap:
The post (screen shot below) on Hoft's right-wing blog was about a Seattle boy allegedly beaten up by a black kid and an Asian kid because he was white. The post ends with Hoft's commentary: "Don't expect this story to make the nightly news. It doesn't fit their narrative." 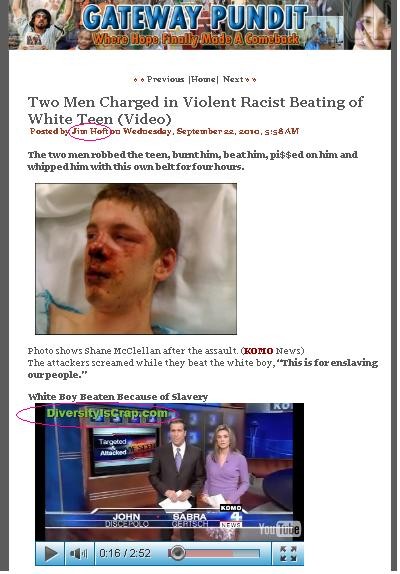 Of course, the story did make the nightly news. That's how DiversityIsCrap.com was able to appropriate video of the victim and place its URL on the TV-news clip (above).

But here's the deal: A simple Google search reveals that there are several other videos of the incident available for embedding that aren't from DiversityIsCrap.com. Why then, did Hoft choose the one from the racist website?

"Are you serious? Really?," replies Hoft to an email from Daily RFT. " I posted the video because it was the only one I found."

Okay, we'll take his word at that. Meanwhile, though, blogger Adam Shriver at St. Louis Activist Hub says he has proof that Hoft has gotten news from racist websites on a few occasions. One of those was last September when a fellow conservative blogger scolded Hoft for trolling for news on the website of the racist site, Council of Conservative Citizens.

P.S. For the uninitiated, Hoft is perhaps best known as one of the St. Louis Tea Party folks who placed a coffin on Congressman Russ Carnahan's lawn earlier this year.