How I'd pick 'em.
We're coming up on the three-quarter mark of the NFL season, meaning our beloved Rams are just about to enter the home stretch. It's been a remarkably exciting season to this point, as well, if not entirely satisfying at times. (read: the San Francisco loss, the Oakland loss, the Tampa loss...you get the picture.) It has certainly been a more intriguing season than those in recent memory, the only positives of which were the high draft picks the team could look forward to making.
And that, dear friends, is where we'll start today.

See, a normal person would be enjoying the Rams' season, riding the wave of good feelings and celebrating the return of meaningful football games to December in St. Louis. Me?

Well, I just happen to be one of those awful people known as draftniks, and so I just can't help myself from looking forward. Forward through the mists of time, forward into a future few of us can even imagine. All the way forward to April of 2011, a time when dinosaurs will once again roam the earth, flying cars will clog the skyways, and the lost continent of Atlantis will rise to the surface and reveal the secrets of our ancient alien overlords. And, perhaps most importantly of all, the NFL draft will take place in New New York.

For the moment, I'm really not interested in the players themselves just yet, largely because the final order of the draft is not yet set. Until we know how the NFL season pans out we don't know where teams will be picking. That being said, just from watching the Rams play this season I expect to finish up right around the middle of the pack. They've got two more losses on the schedule, and three games they could definitely win, I think. I say they finish 7-9 and pick somewhere in the 14-17 range. They can get a good player there, but likely not a slam-dunk guy. Then again, James Laurinaitis lasted all the way into the second round, so don't discount the possiblity of a slam-dunk.
What we're going to look at over the next five days are the biggest area of needs for the Rams to upgrade before the opening game of the 2011 season. Some of these spots can be filled through free agency, of course, but the draft is the lifeline of good football teams. That's just the way it is in the NFL.
To be honest, it would be possible to make a list of about four positions the Rams don't need an upgrade and be done with it, but that's a bit simplistic. (Not to mention cynical.) I do, however, expect that to be the draft strategy in the early rounds in April. They're not picking a quarterback. Middle linebacker is covered. Chris Long has his end of the D-line on lockdown, left tackle looks to be filled for a while, and the kicking game is good. Outside of that, the Rams could really take just about any position they wanted. Unfortunately, that makes for lousy analysis, so here's where I earn my paycheck and break it all down for you.

Here, then, is one of the first needs I see:
Wide Receiver 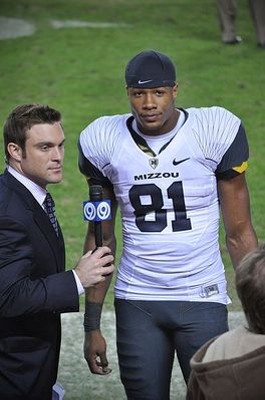 Alexander, standing comfortably on the Jenga blocks that are his knees.
Let me say this right off the top: if Danario Alexander's knees were made of bone and cartilage instead of wet newspaper and twine this wouldn't be such a glaring need. When DX is on the field he's exactly the guy the Rams need. Unfortunately, his health concerns make it impossible (or at least a very bad idea), for the Rams to count on him to contribute at the top of the WR depth chart.
​The reality is this: DX is injury-prone. Mark Clayton, who would be a fantastic number two but is miscast as the one, is a free agent after this season. I fully expect him to be back, as the Rams have a need and he worked remarkably well with Sam Bradford, but it's certainly not a foregone conclusion. Danny Amendola will be back, but he's a slot guy and really could be categorised separately from the wide receivers anyway. Laurent Robinson I can't imagine will be back. Donnie Avery should be healthy, but he's proven to be rather fragile himself and, let's face it, just hasn't been that good even when he's on the field. (I was very high on Avery when he was picked, too, which makes it that much more frustrating to write about him.)
Brandon Gibson is an interesting case. I really like the guy, but the general view among most of the fanbase is very negative toward him. Not that the fan opinion of Gibson will make the decision on whether to retain him or not, mind you, but I find it very puzzling that there's such a sentiment against him. Mardy Gilyard is plenty talented, but there's been talk of him struggling to learn the playbook and the offense, so he's no kind of lock to contribute in the near future. The tight end corps has some good players, but only Mike Hoomanwanui is really a receiving threat. Billy Bajema did have a nice two touchdown game Sunday, but that just isn't his game on a week-in, week-out basis.
Given all that, the Rams' top priority has to be finding a top-flight receiver for Sam Bradford to throw to. We all saw what the Ram offense looks like when they have a guy who can actually go down the field on Sunday, with Alexander making an outstanding catch down the sideline and Illinois Mike going over the middle. If the Rams had a receiver the opposition had to consistently game plan for, this offense would look completely different.
As far as options for that guy go, I'm afraid the Rams may have a tough time finding him in the draft. A.J. Green from Georgia is the best wide receiver prospect since Calvin Johnson, but he's going to go in the top five picks, and the Rams won't have a shot at him. Julio Jones out of Alabama has outstanding physical tools and has finally started to put together a complete game this season for the Crimson Tide, but he's been good enough he just might get snatched in the top ten. If he's on the board when the Rams pick it wouldn't surprise me to see him taken. Jonathan Baldwin of Pittsburgh is interesting, but he's more of a pure possession guy who lacks the explosiveness to be a true threat down the field. Michael Floyd from Notre Dame has the tools, but his hands just don't impress me.
One name which could be interesting is Justin Blackmon out of Oklahoma State. He's been one of the best receivers in college football this year, but as a junior it's unclear whether or not he'll declare for the draft. If he does, I would probably boost him up above Jones as far as possibilities for the Rams. They could also go with one of Bradford's old teammates and take Ryan Broyles out of Oklahoma. Broyles' production is off the charts, but there are some questions about how good he'll be at the NFL level. If he were to be around in the second round when the Rams pick I could definitely see that happening, but in the mid-first I think he might be a bit of a reach.
The good news is this might be an area where the Rams could upgrade via free agency, particularly if they were willing to put up with a somewhat problematic player. Vincent Jackson will be a free agent following his battle with the San Diego Chargers, and he would certainly present that immediate number one receiver presence.

Return to Daily RFT tomorrow for Part II of the discussion: Outside Linebacker.