As the St. Louis region at large fans itself with $100 bills from the enormous stack of settlement cash we recently took out of Stan Kroenke's pocket, the toupee-wearing Rams owner's bucket of woes continues to fill up in exactly the same manner as seats at his team's game do not.

The latest delicious bit of schadenfreude in the ongoing saga of St. Louis hating on Kroenke's goofy ass while blissfully rolling around in his money comes via NBC Sports, which reported this week that the Rams are struggling so badly to get people out to games this season that they've begun concocting a cockamamie charity scheme just to fill seats.

According to a report Tuesday, the team is so concerned that its nationally televised Christmas-day game will see embarrassingly dismal attendance that it is asking season-ticket holders who are planning to stay home to donate their seats to people who might actually show up.

The team has put together a list of 28 eligible charities, and those who choose to donate will find themselves in the running to win prizes from Rams sponsors.

It's not surprising that the team is having a tough time finding folks who would be inclined to watch a shitty team play football badly on Jesus' birthday. This has been a dismal season even by Rams standards, with the team's record presently standing at 3-8. Couple that with the fact they're playing against a similarly awful Denver Broncos, whose record this year is identical, and it's no wonder they have to literally give the tickets away to get anyone to show up.

Still, you'd need to find people who actually want to go, which seems like a tall order.

"For most, that 'gift' falls far closer to lump of coal than official Red Ryder, carbine action, 200-shot, range model air rifle, with a compass in the stock and this thing that tells time," Florio notes. "And for those of us watching that game on TV, we might be inclined to shoot our eyes out."

Meanwhile, back in the town that Kroenke once asserted "lags, and will continue to
lag, far behind in the economic drivers that are necessary for sustained success" in his justification for moving the team, St. Louis leaders reached an agreement just last week with regard to divvying up the $790 million settlement he and the NFL had to pony up. After legal fees, St. Louis city will get $250 million, the county gets $169 million and the agency that owns the Dome at America's Center will receive $70 million. 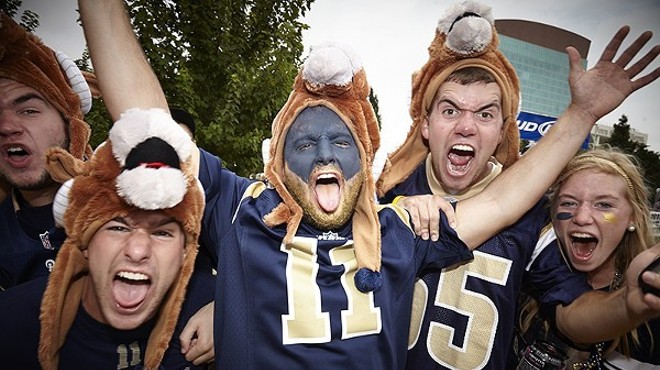 St. Louis Reaches Agreement on Rams Settlement: The $519 million windfall is from the Rams leaving St. Louis for LA


In a tragedy for caterpillar-lipped owners of bad LA-based football teams everywhere,  $571 million of that came directly from Kroenke himself — and it wouldn't appear that he's gonna recoup those losses in ticket sales any time this century.

Sorry about your terrible team, Stan. But we do appreciate the money!