Bill Greenblatt/UPI
An illustration of the proposed Rams stadium -- but we have some ideas to make it more awesome.

The current mood surrounding the Rams' future in St. Louis could be described as somewhere between guarded fatalism and a double frowny face emoticon. :((

Ostensibly announced to compete with Rams owner Stan Kroenke's plans to build an NFL stadium near LA, the new St. Louis stadium would cost between $860 million and $985 million, and would require $200 million in loans from the NFL, $250 million from Kroenke himself and as much as $55 million in state tax credits. The rest, say the plan's architects, would be provided by a handful of other sources, including $350 million from extending the existing bonds at the Edward Jones Dome. The St. Louis Post-Dispatch remarked that the plan, in its current state, rests on "creativity and hope."

1. A Jumbotron Big Enough to be Seen in East St. Louis.

Flickr/Klobetime
This would be a good start, but St. Louis can go bigger.

If St. Louis' business leaders really want to nudge Kroenke away from his plans to move the team to LA, they shouldn't just be appealing to his needs as a businessman, but to his sensibilities as an egomaniac billionaire. Building the world's largest stadium screen would serve to one-up the only other NFL team owner more mercurial and self-possessed than Kroenke -- Dallas Cowboys owner Jerry Jones, whose opulent $1.15 billion-dollar AT&T Stadium (better known as "Jerry's World," pictured above) features a 160 feet wide, 72 feet tall "Diamond Vision" screen. There's no way Kroenke would pass up the chance of being able to wave his own massive, um, screen at Jones at the the next NFL owners' meeting.

And speaking of massaging Kroenke's ego... 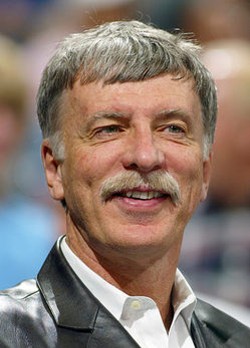 2. Give Stan Kroenke Full Naming Rights to the New Stadium.

Many have commented that the St. Louis' open-air stadium proposal is just another example of a city bending over backward for a monopolistic sports league that primarily benefits surly billionaires. But we think St. Louis isn't going far enough to sweeten the deal for our surly billionaire. "Kroenke Field" kind of has a nice of ring to it, right? And just imagine of the promotional tie-ins, such as...

The NFL has a grand tradition of its fans wearing stupid things on their heads, and the Rams could enter the same conversation as the Green Bay Packers if they offered fans a chance to ape their favorite owner's "hair."

Speaking of the Green Bay Packers, the NFC Championship-bound team rolled out an absurdly large food offering to be served at Lambeu Field, special for this year's playoffs: The 3.5-pound "Big Game Burger," whose mere picture makes our stomachs tremble with both lust and horror.

Missouri Governor Jay Nixon tapped former Anheuser-Busch president David Peacock to help formulate the new stadium plan, but we think the beer giant could use its animal expertise to build an offshoot of Grant's Farm inside the new stadium. (This idea actually isn't so crazy: The Tampa Bay Rays' Tropicana Field features a 10,000 gallon tank in right-center field where fans can feed and touch real-live rays any time during the game.)

As much as Daily RFT adores wild speculation, we'd also love to hear your own completely reasonable suggestions for the future Rams stadium. Let us know in the comments.