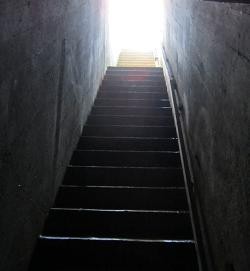 Sunlight pours into the stairs to the River Des Peres.
The entrance to the tunnels of the River Des Peres lies hidden beneath a grate east of the Forest Park Visitor Center. Lift the metal cover and a staircase descends 40 feet into the cool darkness.

For more than 100 years the River Des Peres has traversed the park out of public view. It was the 1904 World's Fair that first prompted city leaders to bury the river, which by then had become something of an open sewer. They enclosed the water in a wooden channel and sealed it on top with a roadway.

Years later -- in 1915 -- a storm dumped seven inches of rain on St. Louis and the waters were too much for the flood-prone River Des Peres to handle. The resulting deluge killed 11 people and destroyed hundreds of homes. The river had to be tamed, once and for all.

Thus began a project that today remains an engineering marvel -- and a reminder that much of the region's water and sewer system is rapidly nearing the end of its lifespan.

Unlike the open-air sections of River Des Peres, the tunnels below Forest Park contain a mixture of sewage and stormwater.
This week the Metro Water Infrastructure Partnership released a study highlighting the need to replace aging sewer pipes running through the St. Louis region. According to the partnership, much of region's storm and wastewater system must be replaced within the next two decades.

For being nearly 90 years old, the tunnels through Forest Park look to be in remarkable shape. Still, rebar can be seen poking out of some fractured sections of the giant channels, which are 32 feet wide. After a media tour of the tunnels today, Metropolitan Sewer District spokesman Lance LeComb told Daily RFT that his agency must improve the pump stations near Manchester and Macklind avenues, where the tunnels empty.

"That's part of our efforts to comply with the EPA," says LeComb. "We need excess capacity to store sewage during periods of heavy rain, so it doesn't mix with stormwater."

MSD is seeking approval to begin $4.7 billion in infrastructure work over the next quarter-century. Construction of the tunnels beneath Forest Park, by contrast, cost about $11 million and took about three years to complete, from 1927 to 1930.

Continue on to view more photos from inside the tunnels.