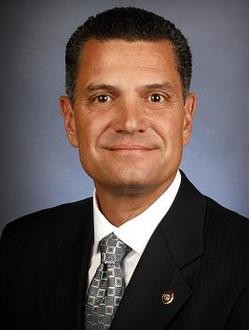 Prosecutors have now postponed Lembke's trial on two occasions.
State senator Jim Lembke was due in court this morning in downtown St. Louis for a jury trial to consider his guilty appeal on a red-light camera citation issued to him in January.

The Republican from south St. Louis County tells Daily RFT this morning that city prosecutors have now postponed the trial for a second time.

"I got a call on Thursday that it was being continued," says Lembke. "They don't want to do anything while the case regarding the legality of the city's red-light camera ordinance remains in limbo." Lembke's trial was originally slated for trial June 6 but remains on hold following a preliminary ruling in another lawsuit challenging the city's red-light camera ordinance.

Circuit Court Judge Mark Neil's preliminary ruling in late May found that St. Louis did not have the legal authority to allow red-light cameras without enabling statutes from the state legislature. That class-action lawsuit against the city continues to wend its way through the court with the preliminary ruling not binding at this point.

Lembke, who's tried for years to ban red-light cameras throughout Missouri, maintains that he wasn't driving a Honda Accord registered in his name when the vehicle failed to come to a complete stop before turning right on red at the intersection of Gravois and Hampton on January 9.

During his initial trial in February in the city's municipal court, Judge Martin Teer Jr. found Lembke guilty when he refused to say who was driving the vehicle if it wasn't him. "It could have been my wife, my son, my daughter, the mechanic. It's not my responsibility to do the work of the state" in determining the guilty party," Lembke later told Daily RFT.

Lembke is at least the third person to appeal their red-light ticket from municipal court to the circuit court. In 2009 St. Louis Circuit Court Judge Robert Dierker appealed and won his red-light camera citation. That same year, Washington University employee Gant Bloom defended himself on his appeal and also won.

Like Lembke's argument, both those cases maintained that the city could not prove that the defendants were driving the vehicles at the time of the infraction. Unlike the other two cases, however, Lembke asks for a jury trial. For those of you interested, here are 16 pages of reasons why Lembke feels he cannot be found guilty of running a red light.