Red Light Cameras Are Changing How We Drive 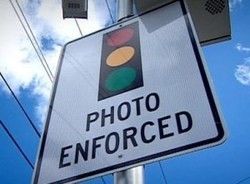 According to statistics the police have gathered during the five years that red light cameras have been operational in St. Louis, 88.5 percent of the drivers who received a fine in the mail are first-time offenders. An additional 9.5 percent of drivers are cited twice for running red lights.

These data lead St. Louis Director of Operations Captain Sam Dotson to state to KMOX news' Brian Blume that, "Red light camera systems, photo enforcement systems, are designed to change behavior. And in 98 percent of the time, it looks like we're changing behavior."

That same article notes that there are more than 50 intersections currently being monitored by red light cameras. Human behavior being what it is, I'd guess most of the people who get stung by a camera fine at a particular intersection would remember that the next time they came to that intersection. If they don't want another fine, the won't run that light, or any of the other 50-plus intersections that are monitored. But that doesn't mean they're not running lights at any of the hundreds of unmonitored intersections.

I've put in a call to Captain Dotson to find out if the actual number of citations given per year is decreasing -- which would seem to be a more solid indicator of the system changing driver behavior -- and also to find out if the number of overall citations quoted in the KMOX story are accurate. Only 217 citations in five years of operation seems low, but maybe St. Louis has far fewer red light runners than I suspect. [UPDATE]: KMOX just appended that 217 with a "thousand," so the true number of citations in five years is 217,000.