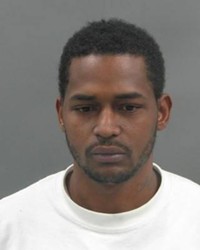 Remus Moore
Two St. Louis men are in custody for the January 11 murder of Bryan Neal in a north St. Louis residence.

He's being held without bond.

Larry Edwards
Edwards, 24, of the 5000 block of Lindenwood in south St. Louis, is also being held without bond.

According to police, the Moore and Edwards got into an argument with the 23-year-old Neal around midnight January 11. They then announced a robbery and shot Neal in the chest.

The suspects fled the scene and were apprehended at a later date.