Refab, "Sustainable Deconstruction" Nonprofit, Robbed of $10,000 Worth of Tools 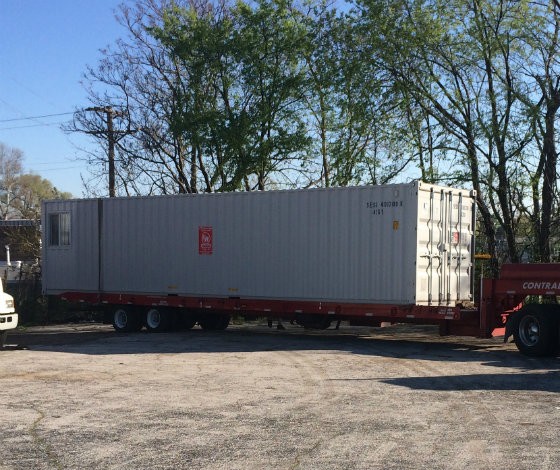 Courtesy Eric Schwarz
The "secure" mobile office where $10,000 worth of tools were stored.

Updated: Daily RFT just heard back from the St. Louis Metropolitan Police Department about the theft.

Refab, the nonprofit that rescues materials, furniture and other curios from St. Louis homes slated for demolition, has been robbed for the second time in the group's short history. The booty: $10,000 worth of tools.

"It was huge," says founder Eric Schwarz. "Those tools are our livelihood."

After they were robbed back in October, Schwarz says he invested in a supposedly secure mobile office made out of an old shipping container. That clearly did not deter the thieves, who cut through the locks, pried open the doors and made off with specialty de-nailers, miter saws, circular saws, a generator and more.

Schwarz says the St. Louis police who responded to the burglary, which occurred sometime on Monday, June 23, told him to look internally to find the thieves. Refab currently has five full-time employees, some of whom were once homeless veterans. But Schwarz dismisses this notion completely.

"We've been pretty disappointed with the response from the police. They basically said, 'This is your guys' fault, it looks like an inside job,'" he says. "We have five employees. None of our employees is going to steal tools."

Schwarz concedes that they've set up shop in a rough part of town -- several of the neighboring buildings are vacant.

"I was just hoping that the police would be a little bit more willing to pick up this case, given that we're trying to do good in a neighborhood that's pretty shitty," he says.

Update: A spokeswoman for the St. Louis police confirmed the details of the burglary but wrote in an e-mail that she is "confused" as to why Schwarz believes no one is investigating.

"This is an active investigation assigned to the 1st District Detective Bureau. Detectives have been in contact with Mr. Schwarz and immediately alerted him to the fact that they had checked area pawn shops searching for items stolen in the incident. Detectives are currently following up on some leads. Anyone with information is asked to contact CrimeStoppers," writes public information officer Schron Jackson.

Corey Woodruff
The bar at the Purple Martin in Fox Park, which is made from Refab material.

Schwarz is waiting for his insurance money to come in, but in the meantime the nonprofit's work has slowed to a crawl. Without tools like de-nailers -- which shoot nails out of salvageable hardwood flooring -- he can't send his crews out on jobs.

Schwarz founded Refab in August 2013 and then opened its warehouse to the public almost exactly a year ago. Most of its jobs come from contractors and home owners who contact the company prior to a demolition to see if there's anything salvageable inside. The Refab crews -- made up of volunteers and veterans whom Schwarz is training for their future in the "green jobs" sector -- show up and take whatever they can, from windows to sinks to clawfoot bathtubs, and sell them to the public. They estimate they've saved 1,500 tons of material from the landfill.

Schwarz says 75 percent of Refab's revenue comes from sales, and he's been loath to ask for cash donations. But after the theft he's in a bind. He's asking that anyone who can chip in to do so here so he and his employees can get new tools and get back to work.

Refab is also having a huge July 4th sale with deep discounts to try to scrounge up some cash on the quick. The sale is Friday from 9 a.m. to 5 p.m. and Saturday 10 a.m. to 4 p.m. at 4153 Bingham Avenue. Find out more and peruse the available goods on the Refab Facebook page.

"The way I set up this organization was to be a little different. We don't go out and ask for money so much, we just run it like a business. People are generous enough to donate us materials we can then turn those materials into money," says Schwarz. "We've been hesitant to go and ask for just monetary donations but right now we're between a rock and hard place. We're at a loss."

Some of the material available this weekend.