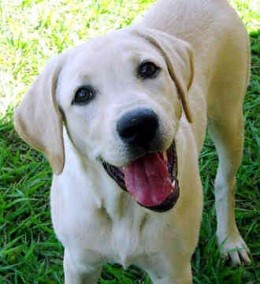 Image via
Todd Akin has likened Claire McCaskill's behavior to "one of those dogs"
In slavish devotion to the "Todd-Akin-says-offensive-things" narrative, news blogs are blowing up with the comment that the Congressman made about incumbent Senator Claire McCaskill at a Springfield fundraiser on Saturday:

Yes, in Akin's analogy, McCaskill plays the part of a labrador retriever. But that's not why it's outrageous.
What was indeed outrageous was his suggestion last month that McCaskill was not acting "ladylike" when she came out swinging in a debate. Wrong, Todd-O. Women are perfectly capable of rolling up their sleeves and playing hardball when necessary.
Which is why McCaskill backers can't really get hot and bothered about this most recent "dog" comment and remain consistent. If Akin had compared a male opponent to a dog, nobody would've blinked. Campaign etiquette doesn't change simply because she's a lady, remember? Plus he wasn't saying she looked like "one of those dogs," but that he was saying she has acted like one.
But she hasn't acted like one, and therein lies the real stupidity of his comment: It makes no sense.
When you tell a dog "fetch," you want the dog to retrieve something for you. In Akin's brain, Missouri told McCaskill fetch, she brought back "taxes and red tape and bureaucracy and executive orders and agencies." So we told her to go get that stuff, but we didn't really want it. Huh?  And how does a Senator "fetch" an executive order, which the president makes unilaterally? We repeat: This is a dumb analogy.
Yes, McCaskill voted for Obamacare, which will indeed bring more taxes (for citizens who snub the individual mandate and refuse to buy insurance) and bureaucracy (to set up the new exchanges and ensure companies are offering adequate plans to their employees).
At the same time, she's fought against government waste by declaring war on earmarks, and on waste and abuse by government contractors in Iraq and Afghanistan.
She does favor of Keystone pipeline running through Missouri, under the theory that if it's going to happen, it might as well "fetch" money and jobs to our state. But she's taken this position at considerable political risk, because many Democratic constituents fear the overall environmental impact of the pipeline.
That's the risk a centrist politician takes -- a risk Todd Akin will never have to worry about.
McCaskill's campaign should combat Akin's analogy with facts, not feign outrage as if female candidates are delicate flowers who hear one canine analogy and require smelling salts.
We know from her record she's a tough lady. We trust she'll continue to act like it.