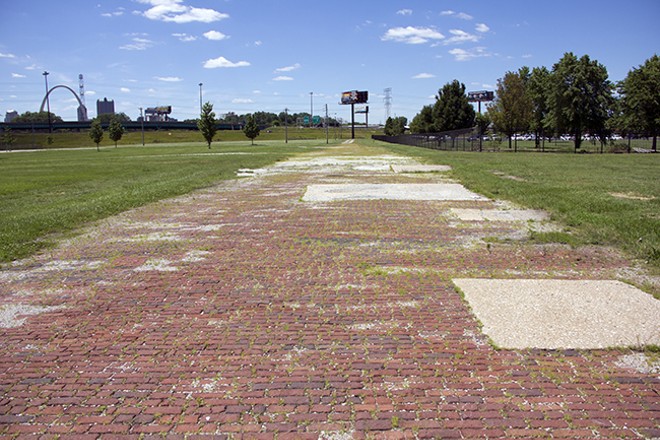 PHOTO BY DANNY WICENTOWSKI
The remains of a century-old brick road runs partway through a grass field in East St. Louis.

There are streets in East St. Louis that lead nowhere but the past. Next to a college campus parking lot, a curb seems to open into a thoroughfare. The pavement runs about a foot and abruptly ends, as if swallowed into an otherwise well-maintained field of grass.

There are other ghost roads like this one, some still showing century-old red brick poking through the ground. When those bricks were first laid, the land where Southern Illinois University's East St. Louis Center currently sits held a neighborhood of black and white families, segregated by mere blocks and crammed up against a railway line.

There are no known living survivors of the East St. Louis race war, but many people still want to mark its 100th anniversary. Six weeks before the actual date, on the last Friday in May, the East St. Louis 1917 Centennial Commission kicks off a two-day conference in one of the college's multipurpose rooms, aiming to commemorate the deadly events and to remember those who were lost.

The keynote speaker is historian Dr. Charles Lumpkins. Through first-hand survivor interviews and years of research, Lumpkins came to the conclusion that there was more to the destruction than just some random or inevitable explosion of racial hatred. The violence, he argued in his 2008 book American Pogrom: The East St. Louis Race Riot and Black Politics, had been fomented not only by union leaders wishing to rid the city of strikebreakers, but also corrupt white businessmen who sought to end black political influence. 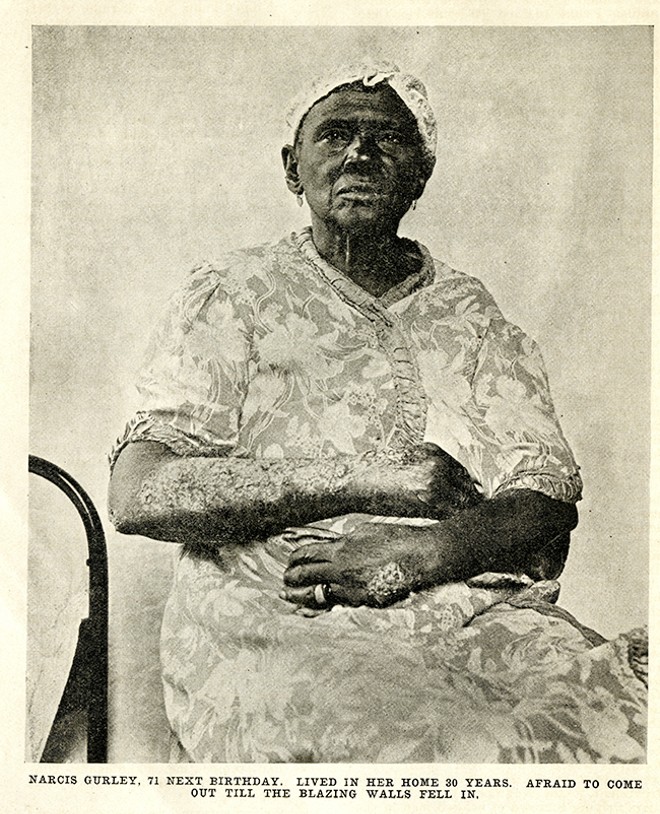 IMAGE VIA THE CRISIS
A 70 year old woman who was burned escaping her home. She'd been "afraid to come out till the blazing walls fell in," explains the original caption.

Urging them to preserve and study East St. Louis' bloody past, Lumpkins notes the horrific events of July 2 and 3 played a significant role in the country's broader history of anti-black atrocities. In the race war's shadow, early civil rights icons like NAACP co-founder W.E.B. DuBois and anti-lynching journalist Ida B. Wells rose to even greater influence, as their work documented the atrocities and shamed complicit East St. Louis city officials. The attention on East St. Louis inspired the "Silent Parade" on July 28, 1917, that drew 10,000 blacks in New York City to protest lynchings and call for a federal investigation into the "race riot." It is considered among the first examples of public protest for black civil rights.

For Lumpkins, though, the broader historical importance cannot eclipse the incomprehensible human suffering.

"As a historian, I try to choke back the tears," he continues. "These are human beings, and that's what we have to remember. Some of you have roots in this city, and that hurt, that trauma, might be passed on down from one generation to the next."

For many years, the appalling stories were passed generation to generation, and the official records were largely forgotten. The transcripts of survivor interviews, which were conducted in the following year by congressional investigators, spent nearly 50 years collecting dust before SIU-Carbondale sociology professor Elliott Rudwick stumbled upon them while researching his groundbreaking 1964 book Race Riot at East St. Louis, July 2, 1917.

Still, it took 80 years to have a major commemoration acknowledging what East St. Louis' black community lived through in 1917. 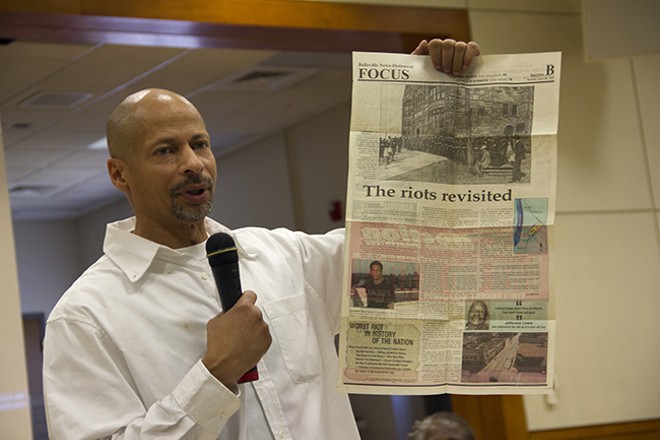 PHOTO BY DANNY WICENTOWSKI
Dhati Kennedy holds up a 1997 newspaper story on the commemoration of the 80th anniversary of the 1917 violence.

It was Samuel Kennedy's twin sons who organized the 1997 event, nine years after their father's death. Two decades later, on the second day of the 2017 centennial conference, Terry and Dhati Kennedy enter the SIUE auditorium dressed in white dashikis and accompanied by a line of drummers.

For the Kennedy brothers, the events of 1917 are not subjects of academic curiosity. The stories are an essential piece of their family bloodline, passed father to son. Today those stories are preserved by a dwindling number of storytellers.

"My father told me," says Dhati, taking the microphone from his brother, "he saw people burned to death. How they'd run out of their houses like human torches, and white people just shooting them down. How people were dragged off the street car and beat and hanged."

Samuel Kennedy had tried to suppress the horrific memories of his youth. But his sons were perceptive. They heard snippets from their uncles and cousins. When Dhati was fourteen, he found himself alone with his father on a drive. Dhati worked up the courage and asked him the question that dogged his childhood: "What happened to our family in East St. Louis?"

The elder Kennedy pulled the car over, and the story spilled out. He told Dhati about the beatings, the fires, and, in methodical detail, the raft and the nighttime journey over the Mississippi.

During an interview at St. Louis City Hall one week after the centennial conference, Terry breaks in at this part of his brother's story.

"When we learned about the raft as children, it of course seemed kind of loony," he says. But he notes with relish that when he contacted his grandmother's side of the family, which had moved years ago to Washington, D.C., he was surprised to hear that they too had grown up hearing about the makeshift raft and daring river journey.

"There had to be some validity to it," concludes Terry. "They had the exact same story."

The Kennedy brothers' desire to honor the sacrifices of their father and other survivors spurred them to action in 1997. At the 80th anniversary commemoration, hundreds marched through downtown East St. Louis as a memorial to those who died on its streets.

By 1997, the survivors who were able to attend were already into their 70s and 80s. One woman, Scotia Calhoun, was 100 years old. She had lived on Piggot Avenue in the south part of town, and she herself had watched the Kennedy house collapse in flames.

Dhati remembers the moment he told her his name. She said, "Baby, your people all died."

Dhati smiles at the memory.