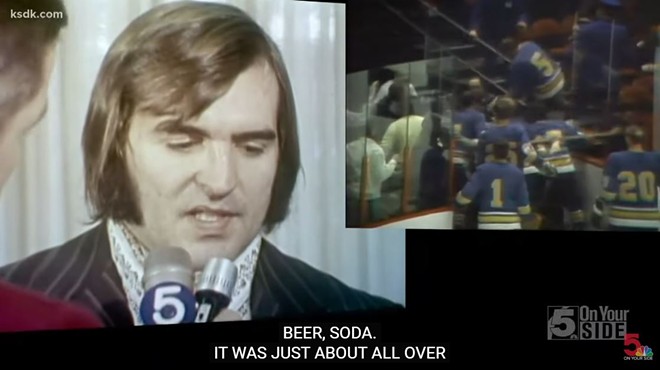 SCREENSHOT VIA KSDK
Bob Plager describing what might be the craziest, and messiest, hockey fight in history.

Bob Plager was the St. Louis Blues — a fighter who made the ice his home, and who became a legend to the city's hockey fans for his bruising play. Tragically, on Wednesday, Plager died in a car crash on Highway 40. He was 78.

Plager lived to see his beloved team hoist the Stanley Cup in 2019, but as fans and teammates remember the man known as "Mr. Blue," it's worth highlighting a particular Plager play that still feels, nearly 50 years later, like the most Blues thing that ever happened.

Of course, it was a fight. A huge fight. On January 6, 1972, Plager waded into the stands during an away game in Philadelphia after watching a policeman bring a club down on the head of Blues coach Al Arbour — sparking a brawl that entangled players, cops, and fans.

"Beer, soda, it was just about all over," Plager told reporters after the incident. His vintage interview, and impressive side chops, are preserved in a retrospective clip aired last year by KSDK (Channel 5).


That wasn't the end of things. Philidelphia police attempted to snatch the offending Blues players by surrounding the dressing room and recording players' jersey numbers as they exited for the second period. But Plager — who the St. Louis Post-Dispatch notes, "was always the last player on the ice" — had another ploy in mind: He locked himself in the dressing room.

Here's how an older Plager described the plan to KSDK in 2020:


"I knew what was happening, they were taking the numbers of players who were really involved. So I turned around and went to the trainer, and I said, 'When you walk out, leave me in here and lock the door. Lock me in here.'"


The plan worked. Minutes later, Plager simply reentered the game and played to its closing — a 3-2 Blues win — while avoiding arrest. Four other Blues players weren't so lucky; they were arrested and spent the night in jail.

Plager retired as a player in 1978, but he'd spend the rest of his life filling various roles with the Blues organization — even helming the team as head coach for eleven games in 1992 — and joined the throngs of celebrants during the victory parade for Blues 2019 win of Stanley Cup.

Police have not released information about the cause of Wednesday's fatal crash. According to a press release from the department, Plager was driving alone in his vehicle, a Cadillac SUV, when he collided with a minivan occupied by two adult women. One was transported to a hospital with minor injuries.