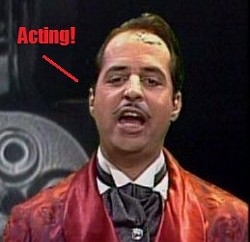 The St. Louis firefighters' union is on the offensive. This week the International Association of Fire Fighters began airing advertisements on local television calling Mayor Francis Slay's attempt to reform the runaway costs of their pension a "raid" on their retirement.

Slay now has his own commercial in response to the "attack ads" from the union.

But which advertisement is better? For that, Daily RFT turns to the foremost expert on "acting" -- Master Thespian.

First up, the union's commercial:

Says Master Thespian: "You call that acting?! Rubbish. Rubbish I tell you! What is that the one widow says? 'Sometimes it is really, really hard?' That's what she said! (Seriously, that is what she said.) And what about the deer-in-headlights white firefighter? You can mentally see him calling 'line!' when it's his turn to address the camera! We tar and feather students for less at the Royal Drama Academy. And where is it that I've seen that handsome African-American fireman? Did he not play Othello at last year's Shakespeare Festival? Wait, no! I know how I recognize him! He's a beefcake calendar model! Mr. March, I believe. I'd recognize those pects anywhere! I suppose they let just any pretty face audition for these commercials?! Atrocious, I say! Atrocious!!!"

Master Thespian: "Zzzzz. Huh? Wha? Yes, I'm awake! I was merely acting! Francis? Now this is a man who knows how to make love to the camera! Witness the nonchalant manner in which he walks (and talks!) toward the audience. And the casual way on which he rests his right buttock on his desk and brings his hand to his heart while discussing the way his mother was saved by firefighters! It brings tears to my eyes. I'm crying. [Sniffle.] Hah! I fooled you again! I was just acting! Seriously, though. This performance left me devoid of emotion. A greater acting sin I know not!"

How about you? Which ad works? Vote below.