The beautification effort would restore the St. Louis park's once beautiful view 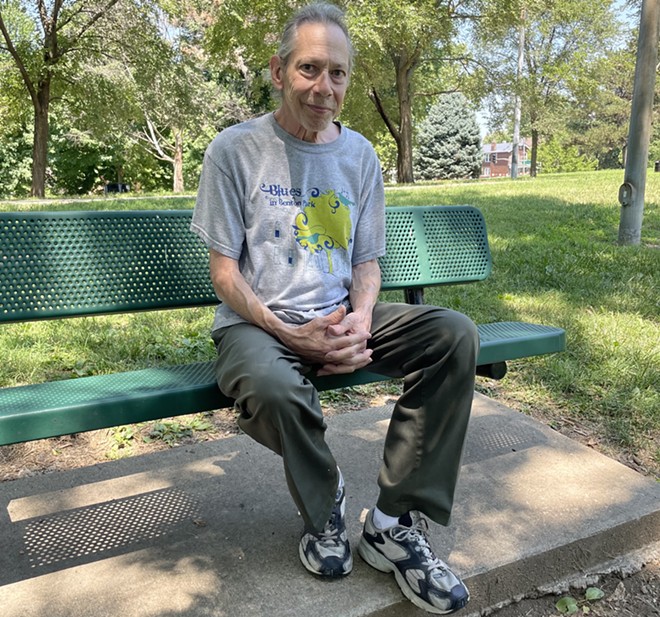 Doc Osia used to sit in Bellerive Park all the time. Atop a bluff, the park overlooks the Mississippi River. From one of the park's eight benches, Osia would watch the river run, the boats pass and the birds fly.

A self-described “bird lover" and "an amateur bird watcher,” Osia says there might not be a better place to watch birds than Bellerive. The river is a flyway, he says, full of migrating birds, eagles, American pelicans and herons.

“It's mother nature at its finest, right here in the heart of the city in South St. Louis,” says Osia.

That was probably five years ago, Osia estimates, back when he could still see the Mississippi River. But he can’t see it anymore.

Trees and overgrown weeds are blocking the view.

Now, he’s calling for that to change. He wants the city's Forestry Division to take down the trees.

“I just can't find it in my heart to see this gem of a beauty wasted here and this view obstructed when it has so much potential,” he says. “...This park is part of the neighborhood, and it's just being neglected, and I just – I can't stand that. It gets me.”

The overgrowth hasn’t been fully cut in 15 to 20 years, Osia estimates. Locust trees, sumacs, honeysuckle and weeds now tower over the park.

Without the trees, Bellerive, located in the Carondelet neighborhood, is the only city park propped up on a bluff overlooking the Mississippi River.

With the trees, it’s a narrow, quiet park with a playground and historic-looking pavilion, where there’s no running water in the bathrooms. One time, Osia called the Parks Division and the operator didn’t even know where it was located.

BENJAMIN SIMON
Trees and overgrowth block the view of the Mississippi River in Bellerive Park.

Born and raised in South St. Louis, Osia served as a chiropractor in the area for 39 years. These days, he’s retired and a volunteer with Bellerive Park and another nearby park, Sister Marie Charles, he says.

“I’m just a guy that lives down here that loves St. Louis and loves this park,” he says.

Along with volunteer Debbie Pfaff, Osia is one of the main people trying to revitalize the park. Every month, Pfaff leads a trash clean-up, or a “trash bash,” as they call it. The park hosts a summer bluegrass concert series and birding events with the Audubon Society.

But it starts with the trees.

Over the past four years, Osia has focused on removing the trees at Bellerive. They have collected signatures in the neighborhood and connected with local aldermen. They hope the Forestry Division will act soon, and they want to replace the trees with native plants.

Osia believes cutting them will bring more people to the park. Then maybe the restrooms will get fixed, and then maybe the “nefarious” activity in the park will disappear. Then maybe the park “will be restored to its original beauty,” he says.

A good park, he notes, could change the entire community.

“I believe it could be a big part of the anchor to the neighborhood to draw businesses down here and people down here to this area,” he says.

Before the end of the interview, though, Osia pauses. He needs to clarify something, he says.

“Please don't get me wrong, I have nothing against trees,” he explains. “I love trees. I’m a tree-hugging kind of guy on a normal basis.