Hope. (Yes, Sandoval. Still, Hope.)
The Rams finished their preseason schedule on a high note, beating the Baltimore Ravens last night 27-21. I know preseason games don't count, and they very rarely actually translate into real season results, but I'll take fake wins that don't count over no wins at all. Plus, it's the second week in a row the Rams played a team expected to be a contender this season and outplayed them with first-string players on the field for both sides.
Should we expect the Rams to be a good football team because of this? No. No, we most definitely should not. I worry fans might get the wrong idea here and actually end up even more disillusioned when the Rams aren't a contender during the regular season. Just like spring training games in baseball, preseason results in football just aren't all that predictive. (The Rams were 3-1 in the preseason last year, too, and we all saw how that worked out, right?)
On the other hand I can't help but feel a little twinge of interest myself, sort of a raised eyebrow feeling I haven't had toward the Rams in a couple years now. These last two games they've actually looked -- do I dare say it? -- kind of, sort of, maybe a little, good.
-- Sam Bradford was, once again, magnificent. Another game against what is expected to be a top AFC defensive unit, another long scoring drive highlighted by ridiculously accurate passing. Ho-hum. To be honest, Bradford was good enough last night I really can't find anything to complain about with his performance. Granted, he didn't play all that long, but any time your quarterback can march a team down the field against a defensive unit like the one the Baltimore Ravens typically boast it's a pretty good day.
-- I went specifically out of my way yesterday to praise Brandon Gibson. Said he had great hands. Said he was outstanding in traffic. Said he could hold on to the ball in tough situations. So what does he do? Gives up an interception when the ball was swatted out of his hands right out in the middle of the field and then flat-out drops another pass. Why do you hate me, Brandon?
On the other hand, he also made a touchdown catch and was quite productive overall on the evening, so I can't bury the guy. I don't know that he did enough to bump his stock up much higher than it already was, but I also don't think he hurt himself much either.
-- Michael Hoomanawanui didn't get a whole lot of time on the field, but still managed to make one of the most dynamic plays of the night when he sprung a 20-yard gain right down the middle of the field. I'll admit I wasn't expecting much of anything from the tight end coming into the season; he was just another hard-to-spell name without much in the way of production to back it up. Watching him in camp, though, he's been nothing short of spectacular in the passing game. He offers a big possession target but also has some real playmaking ability; I'm looking forward to seeing if he and Bradford can maintain this great rapport they seem to have as they move into the regular season.
click to enlarge 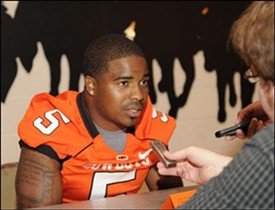 ​-- For me, the most impressive player of the night was probably Keith Toston, the rookie running back out of Oklahoma State. What struck me about watching him run during the middle of the game was how direct he was; there was very little shuffling or juking, no wasted movement. He made his cut, he hit his hole, and he picked up yards, play after play. He ran, in short, like a man with something to prove. (Which, of course, he is, as he certainly isn't guaranteed a spot on the Rams' roster.)
I was a fan of Chris Ogbonnaya when the Rams drafted him two years ago, but I have to say I thought Toston was much more impressive running against Baltimore's second-stringers than Ogbonnaya was running against their third-stringers. Personally I was more impressed with Toston's performance than I was Kenneth Darby's as well. Darby has the most experience of the three backup RB contenders, and had a very nice night of his own (39 yards on 6 carries), but I was really, really impressed with what I saw from Toston. In my mind he makes the best choice for a backup to Steven Jackson, but even if the Rams go with Darby I hope they can find a spot on special teams or somewhere for Toston.
-- Both backup QB contenders looked good. Thaddeus Lewis probably had a little better night statistically than Keith Null, but honestly I thought Null threw the ball better. Really, though, I thought both of them played very well, and I would be comfortable with either of them going into the season behind Bradford and the primary backup A.J. Feeley. Overall in camp Lewis was better than Null, who struggled with his accuracy early on. I'm kind of expecting Lewis to get the nod, and I'm okay with that.
-- It was nice to see Victor Adeyanju have a solid outing. After looking like a possible breakout player a couple seasons back, Adeyanju has struggled to find a way to carry that momentum forward on the field. He looked very good last night, healthy and quick. Maybe he's ready to finally take that next step forward we were all expecting.
All in all, I thought the Rams' performance last night was outstanding. They played very good football against a very good opponent from a tough division. Will that effort translate into regular-season wins? I suppose we'll all just have to wait to find out, but I'm very encouraged by what I've seen from this team not just last night, but really all the way through camp.