In Missouri, there's a renewed push to end teacher tenure, which supporters say would ensure that the best teachers stay in the classroom. But opponents argue that abolishing tenure amounts to an unfair attack on teachers, and it doesn't help that the initiative's backer, Rex Sinquefield, last year made a controversial comment comparing the public school system to the Ku Klux Klan. Sinquefield, the wealthy investor who has spent tens of millions trying to repeal income taxes, apologized for the comments.

But the KKK controversy might remain a talking point of his critics as the push for a proposed ballot measure to bar teacher tenure moves forward.

"What we are trying to do is really...elevate the teaching profession," Kate Casas, state policy director of the Children's Education Council of Missouri, tells Daily RFT. "That they are able to be promoted and retained in the same kinds of ways that other very respected professions are."

This new campaign against tenure comes in the form of a proposed ballot measure, reported by the Beacon last week. Daily RFT got a copy of the latest version, on view below, which advocates have officially submitted as an initiative-petition to the Missouri secretary of state's office. From there, it has to go through a series of steps and get enough signatures before it appears on a ballot where voters can directly weigh in; that could happen in 2014.

The effort is officially backed by TeachGreat.org, which appears to be a coalition of advocacy groups. As the Beacon reported, the group and ballot initiative is funded by Sinquefield. His attorney connected us with Casas, of the Children's Education Council of Missouri, an advocacy organization that is supporting the campaign and has lobbied for similar legislative proposals in the past. 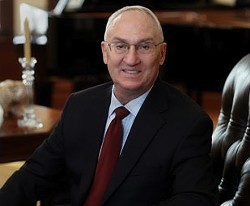 "We've been, ever since I was in the classroom, huge proponents...of reforming the way that teachers are evaluated and the way those evaluations are used to make decisions," Casas says, "about who is hired, who is able to stay if layoffs are needed."

As written, the proposal says that no school district receiving any state or local tax revenue funding is allowed to enter into new contracts that go beyond three years. In other words, lengthy or indefinite contracts would not be signed going forward.

In Missouri, Casas argues, there are now more effective ways to evaluate teachers based on student progress during the time that teachers are with them -- such that it only makes sense to have a more flexible employment system without rigid contracts.

Referencing more "objective" measures, she says, "Let's use it effectively to protect great teachers from layoffs and to ensure we have the best teachers in front of the classroom."

Continue for more details on the ballot initiative and the full document.

The measure was filed last year but didn't make it onto the ballot.

The proposal is very similar this year, but Casas says that the state has a more concrete evaluation program in place now, which means that the time is right to end tenure.

Does she expect criticisms that this initiative would be hostile to teachers?

"Saying this is demonizing teachers is misguided," she says, arguing that there's an assumption that this is based on past evaluation models regarding the number of children in the classroom at grade level. "That would be scary. But that's really not what this is.... How do we accurately measure the value that a teacher is adding to a student's life while they are in that classroom?"

Of the KKK comment Sinquefield made -- raised by an opponent in the Beacon piece -- she adds, "I don't think that that's a concern. We want to stay focused on what is best for kids. Mr. Sinquefield has apologized for that. We are all ready to focus on kids."