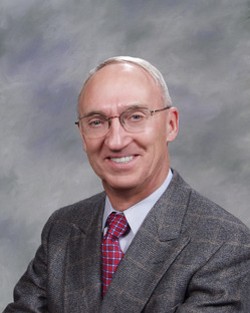 Sinquefield: Francis Slay has his back on museum placement.
The Post-Dispatch this morning follows up on a story Daily RFT broke months ago.

That's the fact that Rex Sinquefield, the financier who spent $11 million to get a recall of St. Louis' earnings tax on next month's ballot, is not registered to vote in the city because he maintains his permanent residence in out-state Missouri.

Yes, even though Sinquefield owns a $1.7 million mansion in the Central West End, his address for voting purposes is in Osage County where he owns a 580-acre compound. According to the Post-Dispatch, that includes a 20,000-square-foot modernist mansion.

As Daily RFT uncovered last year, Osage County is also where Sinquefield registers his Bentley and fleet of other vehicles. (Osage County, btw, has a much lower personal property tax rate than St. Louis, saving Sinquefield thousands of dollars each year.)

What the Post-Dispatch brings to the table this morning in terms of new "news" is that Sinquefield's appointment last year to the Saint Louis Art Museum's Board of Commissioners appears to violate state law.

That's because the museum, which is funded through a property tax of St. Louis and St. Louis County, is required to staff its board with local residents.

Mayor Francis Slay (who received $75,000 in donations from Sinquefield in 2009) overlooked this factoid when appointing Sinquefield to the museum's board. And, frankly, even now that it's been pointedly pointed out, the mayor doesn't care.

"We believe that Rex does meet the statutory requirements," Slay's media flack, Kara Bowlin, tells the Post-Dispatch. "He lives in the city."

Here's the deal, though: Every other member of the museum's ten-person board of commissioners is registered to vote in the city or county, according to the daily paper. And, for taxing purposes, the city's revenue department doesn't consider people registered to vote outside St. Louis as city residents.

So, the question remains: What the hell is Sinquefield doing on the museum's board?