RFT Asks: What’s It Like To Fish in Forest Park? 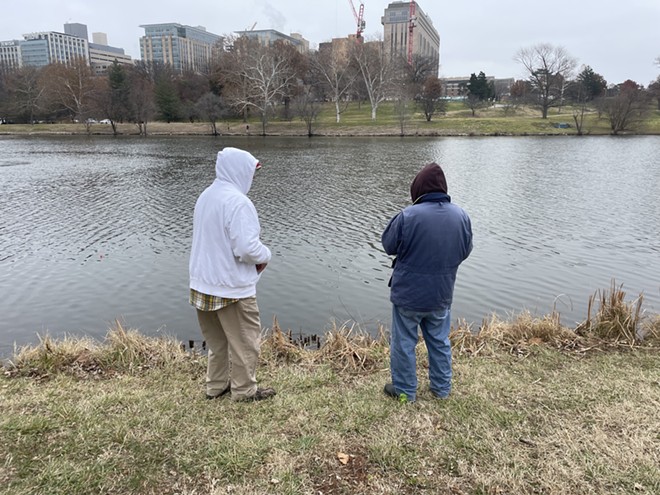 BENJAMIN SIMON
Denny Vaninger and Kevin Burke tough out the cold in December to fish at Forest Park.

On a cold Monday morning at 10 a.m. in December, two people are fishing at Jefferson Lake next to Steinberg Skating Rink in Forest Park. Their names are Denny Vaninger, who once played for the U.S. men’s national soccer team, and Kevin Burke. The gentlemen wanted to talk but didn’t want their pictures in the paper.

What are you doing out here?

DV: Trout fishing. Catch and release. Rainbow trout. That’s about it. Hanging out. Catching a couple fish. Throw them back in.

How does it work?

KB: They stocked about [3,600] fish in here about a month ago. It’s catch and release. You have to use artificial bait. You can’t use live bait. And then you have to return them. ... At other parks, they let you use power baits, it’s called, which is a dough bait. And you can keep them with the other parks, like Suson and Carondelet.

So you go to different parks?

DV: There’s a hotline — Missouri Department of Conservation has a hotline. They have a hotline you call, and then it tells you how many places, where they stock them, how many they stock. And we call that. When they stock them, we come here and just hang out. Catch fish. Throw them back. Bring our grandkids every once in a while.

So what's your process? Do you wake up in the morning and call?

Is it fun if you don’t keep them?

DV: It’s fun because we just catch them, hanging out. We’ve been doing this for 60 years.

Have you caught any today?

Is that a good day?

DV: — Just something to do.

Where are the best places to fish in the city?

DV: Well, we come here for trout. And then we sometimes go to Whitmore and Carondelet where they put catfish in the summer. We got grandkids, we take them there, they catch some fish catfish. It's fun.

KB: It's more fun with the grandkids.

[Both break out laughing.]