RFT Asks: Who Are the Dancing Santas?

Courtesy of Pure Entertainment
The Dancing Santas perform all across the St. Louis area during the holiday season, including this spot in the Central West End.

Imagine you're driving to work when you stop at a red light and see ... Santas dancing at the intersection. That would be Reggie and the Dancing Santas, who have been entertaining St. Louisans across the city for four years. We interviewed Reggie Van Derson, a local DJ, dancer, teacher and owner of Pure Entertainment Company. Visit pecparty.com/dancingsantas.html to learn more. This interview is edited and condensed for clarity.

How did the Dancing Santas start?

I teach a hip-hop workout class [Hip Hop Mamas], and it's an all-ladies class. Every now and then we'd go out and dance at a club or do something fun as a group. Basically, it turned into a social group.

So one day, Cuppie, which is short for cupcake, said, "Hey, you know, my son in California, he had a couple of friends, and they all bought Santa suits." And we were like, "That sounds fun. Why don't we do it?"

So we were going to go out and walk around with Santa Claus outfits on. But we happened to go to [the Missouri Botanical Garden] where there was music playing, and because it was a hip-hop workout class, we started dancing. We realized that really drew a lot of attention and made people feel good to see Santas dancing.

And you kept it going?

One day, I was sitting at home, and Cuppie, who actually works for my company, said it would be fun to go out and do this more. She also felt that the way people responded was just amazing. I said, "We need to do something." Like spreading Christmas cheer is what we were realizing that we were doing. So we were like, "Wouldn't it be cool if we actually did it like out in the street at the stoplight? You know, while people were waiting at a stoplight?"

Do you have a favorite song that you dance to? 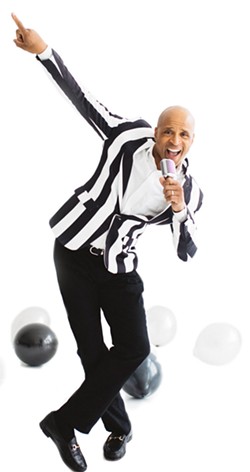 I think my favorite will always be "All I Want for Christmas" by Mariah Carey. Because I think so many people sing with us while we're dancing to that song. That is still my favorite.

I bet you have some wild stories of dancing at red lights at St. Louis intersections.

Oh yes. One of my biggest memories was the first year we did it. I've performed for years. I'm a DJ for my company and I am a professional MC. I've been entertaining for years. There's something about when you have 60 cars lined up with their heads lights facing you and you're dancing and you can see all the way down Lindbergh. It's amazing. I wish I could show that perspective.

Are you guys setting up cones and performing all of the time? Or are you just stepping out during red lights?

We all go out at one time [when] the yellow light hits. If there's someone driving and they're speeding and it's a yellow light, we won't go out. It has to be right. So if the cars are slowing down, and that light changes, we timed everything out to where we go out, we do our routine, and we pick everything up. Because we take presents, we take props, all kinds of stuff [into the street], pick it up and walk it back out, even before the light turns green. So it is an organized monster.

So you already have songs ready to go on the boom box?

Yes, music is queued up. It's ready ... GO! It's like Saturday Night Live –– it's all live. But it's funny because when you get an extra second or two, I started moonwalking at the end as I go off because I realized I still have four seconds [left at the light]. I call those shenanigans because people are not expecting it, and they love it, you know?

To see the Dancing Santas, visit: Kirkwood on December 10 at 12 p.m. and the Central West End during the Winter Window Walk on December 17 from 3 p.m. to 4 p.m.