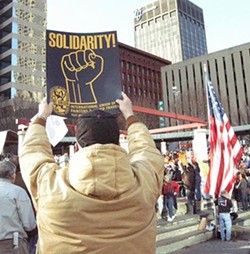 Image via Show Me Progress
If you haven't heard (which is likely), Friday's rally drew 4,500 to Kiener Plaza
Correction: This post initially stated that the "right-to-work" bill was part of the Missouri Chamber of Commerce's "Fix the Six" campaign.  It is not.

The Missouri Senate today is debating a bill (SB 1) today sponsored by Luann Ridgeway (R - Smithville) that would prohibit workers from having to join unions or pay union dues as a condition of their employment.

The so-called "Right-to-Work" legislation is one of a handful of bills the Missouri Chamber of Commerce is pushing this legislative session. (Other initiatives include overturning a  2006 statewide referendum on minimum wage scales and making it more difficult for terminated workers to sue their ex-employer if they believe they were fired as a result of discrimination.)

Unlike Wisconsin's efforts to strip state employees of their right to bargain collectively, the union-busting legislation in Missouri is getting scant attention. But it's not because no one is protesting.

To that end, the website Show Me Progress had an interesting piece Saturday about how a rally of 4,500 union workers and sympathizers at Kiener Plaza on Friday got nary a mention in the Post-Dispatch.

As the author of Show Me Progress opines, a Tea Party rally that big would likely earn prominent coverage in St. Louis' daily.

Ignoring a rally 4,500 strong called about an issue that is sweeping the nation -- corporate greed and the war on working people -- is hardly "covering" local news.

Right now it appears that union supporters won't have enough votes to block SB1 today. We'll keep you updated on the progress. For the record, twenty-two states are currently "right-to-work" states, including six of the eight states bordering Missouri. (Illinois and Kentucky being the exceptions.)

Update No. 1: Today Post-Dispatch political editor Christopher Ave responded to an inquiry from Adam Shriver at St. Louis Activist Hub inquiring why his paper did not cover the rally. Ave responds...

We had a reporter at the rally, but he was called away to help cover local reactions to the tsunami.

Pardon me, but who gives a rat's ass what Joe Hoosier in south city thinks about the tragedy in Japan?

Update No. 2: This post elicited a call from Karen Buschmann with the Missouri Chamber of Commerce pointing out what she considered a number of "inaccuracies." One of which was an error as noted earlier. The Chamber endorsed the right-to-work legislation after already making up the "Fix the Six" campaign. (Fix the Seven didn't rhyme.) Buschmann also argued that the change to the minimum wage law would not lower wages for Missouri's poorest-paid employees. Rather it would keep the wages consistent with federal law and not let them grow as pegged with inflation as Missouri voters passed by a 3 to 1 margin in 2006. To-may-toe. To-mah-toe.

Update No. 3: Right-to-work bill stalls in the Senate.