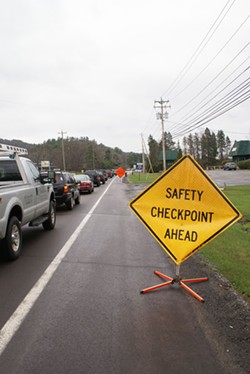 Image via
Since 2007, state troopers have arrested more than 2,000 people at checkpoints near Camp Zoe
Just after midnight on October 29, 2008, the Missouri State Highway Patrol pulled over a 1989 Ford van on Route 19 in Eminence, Missouri. The driver, a 23-year-old from Desoto named Joseph Wayne Bay, gave the state troopers permission to search his vehicle -- even though he was hauling a load of drug-infused Halloween treats.

Bay was arrested and charged with four felony counts of possession of a controlled substance and possession of drug paraphernalia. He eventually pleaded guilty to one of the possession charges and was sentenced to three years probation, according to court records.

Bay's arrest that night in October coincided with Spookstock 7, a Halloween-themed music festival at Camp Zoe, located a few miles north of Eminence. Highway patrol records reveal that Bay was hardly the only person who was busted on Highway 19 during the weekend of a Camp Zoe event.

Since 2007, state troopers conducted fourteen "safety checkpoints" at a busy intersection six miles north of Camp Zoe -- and not so coincidentally, they did so on days when a high volume of traffic was headed to the campground for events like Schwagstock and Spookstock. They arrested a total of 2,388 people, including 171 people on charges of felony drug possession and 782 for misdemeanor drug possession.

Earlier this month, federal prosecutors filed a complaint attempting to seize the 350-acre Camp Zoe property through a legal process called asset forfeiture. The court document says that a four-year-long undercover investigation, conducted in part by the Highway Patrol, uncovered rampant drug use and sales on the property and that owner Jimmy Tebeau and his staff were complicit in the activity. (Through his attorneys, Tebeau denies the allegations.)

Sgt. Marty Elmore, spokesman for the Missouri State Highway Patrol district that includes Shannon County, says the roadblocks were not part of a larger investigation into suspected illegal activity at Camp Zoe. He acknowledges, however, that they were intentionally timed to coincide with festivals at the campground.

"Any time we know there are going to be a lot of people going in and out of a place for some kind of special weekend, we'll always try to have a presence in that area, if no other reason than for traffic issues," Elmore says. "But we did plan to have special operations that coincided with those events because there was a lot of people. That's not to say everybody who was arrested at the checkpoints was necessarily going to Camp Zoe or coming from there. I wouldn't want to draw that correlation."

Asked to provide data about arrests at each roadblock at the junction of Route 19 and Highway A (see map below) since Camp Zoe opened in 2004, Elmore points to an online archive of the department's news releases. The documents detail an extraordinary number of arrests and citations at each roadblock -- in fact, only once did the mass traffic stops net fewer than 100 arrests.

A checkpoint on May 23, 24 and 25 -- the same days as Schwagstock 37 -- resulted in 268 arrests, including 23 for felony drug possession and 107 for misdemeanor drug possession. (Not every incident was so serious: 50 people were cited for not wearing their seatbelts, fifteen for not having a drivers license and one for "careless and imprudent driving.")

View Larger Map
"We had so many drug arrests when I sent [the press release] off to Jeff City, the clerk said, 'You've got a typo,'" Elmore recalls. "She said, 'There's no way you had 200-and-however-many arrests at this checkpoint.' I said, 'No, that's accurate.'"

Tony Rothert, legal director of the ACLU of Eastern Missouri, says he received several complaints each year about the checkpoints in Shannon County.

"We're opposed to those roadblocks and think they violate the Fourth Amendment," Rothert says. "The courts have outlined some times when roadblocks are allowed, but even then they have to be neatly tailored -- they can't be general searches for illegal activity."

In recent years, members of Greater St. Louis NORML set up signs a few miles ahead of the roadblock warning motorists that their vehicles would be searched. Terri Zeman, co-director of the local NORML chapter, says that group members also handed out "bust cards" from the ACLU with information about search and seizure rights and warned drivers to wear their seatbelts and have car insurance ready.

"We all thought they were ridiculous," Zeman says. "It's just a terrible waste of time. There's something to be said for drunk-driving checkpoints but these were clearly targeted at people going to Camp Zoe."

This summer, the authorities struck back. Shannon County sheriff''s deputies arrested two NORML members who erected the roadside signs and charged them with "placing [an] unauthorized sign/signal device on/on view of highway," a misdemeanor.

Dan Viets, Tebeau's attorney's in the Camp Zoe case, is also representing the two NORML members in court. "The charge is baseless," Viets says. "It is harassment by the Shannon County Sheriff's Department, who apparently doesn't like people being told of their constitutional rights."

Viets calls the roadblocks "a police state tactic," and says the high number of drug arrests is not indicative of drug activity at Camp Zoe. "If they started doing [roadblocks] at any large gathering they'd find people with some prohibited substance," he says. "The more enforcement activity they concentrate in that area, the more people they'd catch. If they set up outside a Cardinal's game they might catch people too."

According to Viets, Tebeau actually asked "local law enforcement" to help patrol Camp Zoe during festivals, but his client's request for help was denied. (The campground was patrolled by private security guards from B&D Security; the owner of the company declined to comment.)

Asked why the highway patrol decided to employ roadblocks instead of patrolling inside of Camp Zoe, Elmore replies, "That's not something we'd typically do. If we believe that a particular location has an inordinate amount of that kind of [drug] activity and thousands of people present in a small concentration, we'll be hesitant to send a couple troopers in there by themselves, simply because of the gross disparity in number of folks. We're not going to send them into the lion's den."