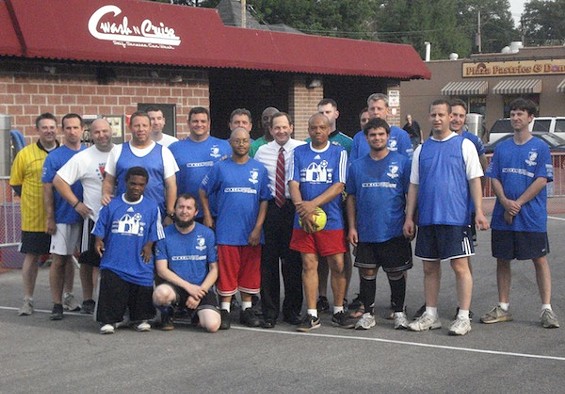 The most interesting moment in a soccer game between a team consisting of homeless residents and a team of cops might be the moment when a runaway ball hits a parked car -- hard, and right in front of the mayor -- and the car alarm starts screeching.

But as it turns out, what happens in that moment is what happens in many moments throughout the hour-and-half-long game. It's a mixture of relief (that there's no serious damage to the car) and a chance for a good-natured joke: "Anybody know a good body guy?"

St. Louis' street soccer team, the Roadies, took on the police team of Unsung Heroes in an exhibition match in the car wash parking lot across from Amsterdam Tavern last night. The game's goal (no pun intended) was to raise money for the Street Soccer USA Cup in Washington, D.C., June 10-12. The game brought jokes -- lots of them -- curious fans from the neighborhood, an intentionally barefoot player (ouch) and more than one rogue soccer ball.

It also attempted to raise the final $1,000 the homeless players need to send an eleven-man squad to D.C. next week. Total price tag: $5,000.

Last year, with Amsterdam's help, the team raised $1,050 at a similar event. This year's fundraising has been helped by one coach who won $2,000 in an ugly Christmas sweater contest and donated the funds to the team.

Founded by Peter & Paul Community Services four years ago, the Roadies have competed at the national level each year. Membership on the team is a doorway for services including job searches, resume advice, drug and alcohol counseling and help reconnecting with families. Being on the team requires a pledge of 100 percent sobriety; entrance into the workplace is strongly encouraged.

"We get aggravated when they miss practice," says Keith Deisner, one of the team's ten coaches. "But when it's because of work, it's completely OK."

The Unsung Heroes won last night's match against the Roadies 7:6, but a fundraiser rematch is in talks for a later date.

In addition to the money raised, the match took place to reinforce to both teams, and to onlookers, that the relationship between cops and homeless people doesn't have to be strained. What the game included in aggression -- some plays got intense -- it made up for in one-liners.

The score? Sorry, it grew pretty hard to keep track.