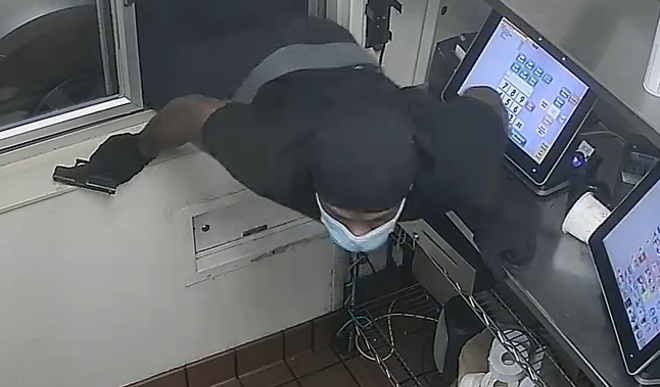 ST. LOUIS METROPOLITAN POLICE
The gunman in action, climbing through the window of a St. Louis McDonald's.


St. Louis police say a gunman crawled through the drive-thru window of a McDonald's on Thursday to rob the place — and then he did it again on Friday.

The twin heists both happened early in the morning hours, and the man posed as a customer each time before springing out of a silver-colored SUV and in through the restaurants' windows.

ST. LOUIS METROPOLITAN POLICE
Police say he ordered employees at two restaurants to open the safes.
The first stickup began just before 5 a.m. on Thursday at the 4600 Lindell Boulevard location in the Central West End. The man, dressed all in dark clothing, except for a light-colored medical mask, was armed with a handgun when he hauled himself inside the fast-food restaurant, police say. He ordered an employee to open the safe, took the money out — and then got back in his SUV and drove off.

On Friday morning, police say, the same robber pulled up about 5:30 a.m. to the McDonald's at 119 North Tucker Boulevard on the edge of Downtown. Once again, he pretended to be a customer before bolting through an open drive-thru window. 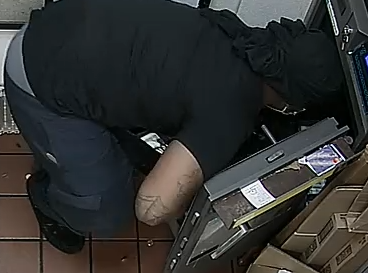 ST. LOUIS METROPOLITAN POLICE
The robber has a spiderweb tattoo on his right elbow.

He demanded employees open the safe, but something went wrong and he wasn't able to get any money this time. Police say he crawled right back through the window and left.

Police are still looking for him and have circulated surveillance photos from the two incidents, pointing out the spiderweb tattoo on his right elbow and the missing gas cap on his SUV. They ask anyone with information to call CrimeStoppers at 866-371-8477 (TIPS). 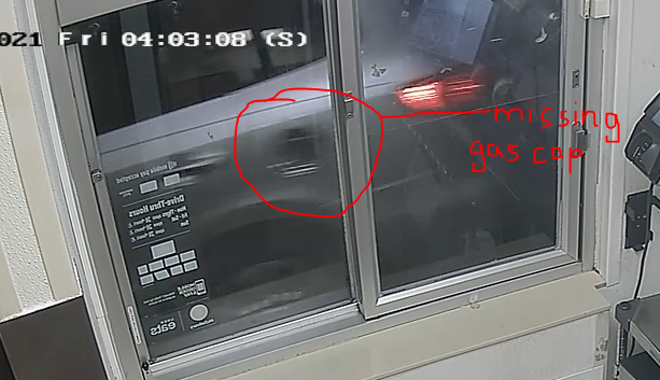 ST. LOUIS METROPOLITAN POLICE
An image of the missing gas gap, highlighted and marked in red by SLMPD.