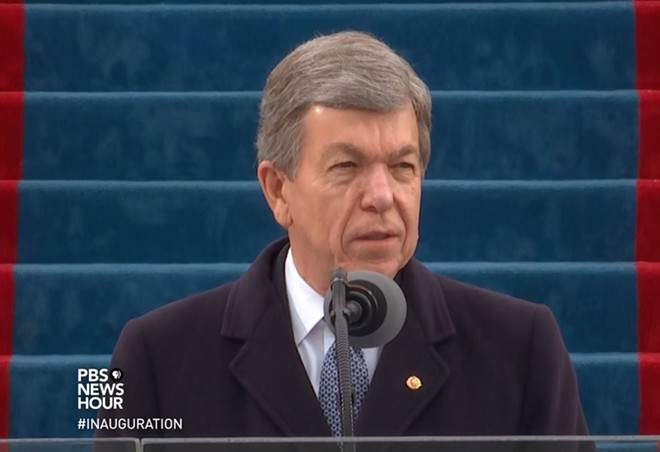 Roy Blunt has responded to his inclusion on a list of 21 names tweeted by journalist Carl Bernstein that is purported to represent GOP U.S. Senators who have expressed "extreme contempt" for President Donald Trump and his "fitness to be POTUS."

"From the day I stood beside President Trump as he was sworn in as president, he and I have had a good relationship," Blunt told the Kansas City Star's Bryan Lowry on Monday. Blunt's response did not directly address Bernstein's list or convey that the U.S. Senator has any strong emotions related to Trump and his relative contemptibleness as president.

Blunt's statement on Trump concluded, "He has worked effectively with the Senate to enact significant accomplishments as president."

Bernstein had tweeted the list Sunday night, writing that the Senators "have repeatedly expressed extreme contempt" for Trump's ability as president.

"With few exceptions," Bernstein continued in a later tweet, "their craven public silence has helped enable Trump’s most grievous conduct—including undermining and discrediting the US the electoral system."


Blunt is something of a master at the ultra-bland two-sided non-denial. Five days after the November 3 election, he told George Stephanopoulos on ABC News' This Week that a Trump win was "unlikely" and encouraged the president's lawyers "to present the facts and let the facts speak for themselves" — and then, just days later, Blunt committed a graceless turnaround during a November 11 press conference, telling reporters, "The president wasn't defeated by huge numbers. In fact, he may not have been defeated at all."

Blunt's skill at sidestepping questions about Trump's character and actions goes back to 2016, when the Senator, then up for reelection, repeatedly found ways to not talk about the Access Hollywood tape (in which Trump described plainly his belief in his entitlement to women's bodies) as well as later allegations from women who claimed Trump had assaulted them.

Though Blunt did not see fit to provide a full-throated denial to Bernstein's claims, his choice to ground his relationship to Trump in the 2017 inauguration is ... interesting, though in a bland way, of course.

How did Blunt get such a prime spot next to Trump at the inauguration? It was because Blunt was chair Joint Congressional Committee on Inaugural Ceremonies. It was a position Blunt had not volunteered for out of some burning case of Trump fever, but because the task fell to him as the chairman of the Senate Rules Committee.

The charge also gave Blunt the honor of delivering the opening remarks of the 2017 inauguration ... during which the Senator extolled the peaceful transitions of power of America's past and did not mention Trump by name once.

Instead, Blunt bookended his 2017 remarks with a quote from Ronald Reagan's first inauguration, in 1981, a ceremony that Reagan had described in awe as "commonplace and miraculous."

Blunt remains the chairman of the Joint Congressional Committee on Inaugural Ceremonies, which means, pending the ongoing legal theater, he will deliver the opening remarks for the January 20 inauguration of Joe Biden.

Try not to get too emotional, Roy.