Marian Amies biked around the streets surrounding Tower Grove Park in 1992, feeling like she could be forgotten.

"Well if I fall off my bike now, nobody's gonna know," she recalls thinking.

Amies, who is originally from England, was 52 at the time and fresh off a divorce that ended a 26-year marriage. She was enjoying her newfound independence, but her bicycle rides around St. Louis made her realize how much she wanted companionship, too.

"I used to ride my bike in Tower Grove Park at six o'clock in the morning, and maybe I'd stop at the diner on South Grand and have breakfast," she says. "And it was — sometimes it was dark. And then I would sometimes go to the Bread Company, and I would feel so single when all I could see was sort of like couples everywhere."

So, she decided to put a Person-to-Person ad in the Riverfront Times, hoping to find a guy interested in some of her favorite things. She included a list: "... dance music, exploring the countryside, cafe, eclecticism, rubber chickens ...."

The personal ads ran from 1979 into the 1990s under one name or another — functioning like Tinder, way before someone could swipe left or right on a smartphone screen. They were ads where someone could publish a passage about themselves — physical traits, passions, romantic interests — in hopes of finding a friend, lover or partner. Then, respondents to an ad would call an extension number and be charged a few dollars per talk minutes.

Amies received nineteen replies, she says. The respondents included some interesting suitors, but none seemed quite right.

There was the economics professor, who Amies suspected had a drinking problem because he did not drive a car.

And there was the archaeologist who worked in the Cahokia mounds.

"He would tell me that when they went into some of the Indian mounds that the archaeologists would protect themselves, because it was sort of like electrical impulses," she says.

Amies says she did not like the archaeologist in the end, because all the smoke from his pipe filled the Wabash Triangle Café as they talked. She notes that the café burned down shortly after their date.

"I didn't think it was a lot of fun to do really, because it was so anxiety provoking," she says.

Still, she kept at it. In November 1992, she sorted through the replies and settled on one from a man named Bill Kranz. They agreed to meet at Casa Gallardo, a now-closed Mexican restaurant in Westport Plaza.

Kranz was intrigued by the long list of interests Amies had written for her ad, such as art galleries, rubber chickens and the color indigo blue.

On the night of their date, Amies was not sure what to expect. She can still remember the jacket she wore.

As usual, she was nervous with anticipation, but then Kranz walked in. Almost instantly, her anxiety faded away. He had written a poem for the occasion and carried flowers in Amies' favorite color, indigo blue.

"When Bill showed up with flowers in the color, the indigo blue colors, and I got this poem," Amies says, "I mean, it seemed like [he] made a big effort. And it was special."

Amies had a few reservations, primarily the twelve-year age gap between the two.

But she decided to put that to the side.

Kranz had a job at Edward Jones and had also spent time as a seasonal worker at Yellowstone National Park. In his free time, he staged theatrical productions.

That first blind date was in mid-November. By that Christmas, they were enough of a couple to spend the holiday with Kranz's family. And so started a journey of nearly 30 years of follow-up dates together.

"Everything that we did sort of became like a date," Amies says.

One of those dates was a trip to Yellowstone National Park in the summer of 2008, when the couple attended a park staff reunion.

But when they were sightseeing at Norris Geyser Basin, something went terribly wrong. Amies got a stomachache, and a long line for the porta potty made things seem grim.

"I was gonna have a blowout," Amies says, between laughs.

So, Kranz — a soft-spoken guy — took things into his own hands, acting as a police-car escort as the two cut the line.

"Bill was sort of behind me and he said, 'Oh, she's ill, she's ill,' and we were sort of like going in front of everybody," Amies says.

Now, any time the couple finds themselves in an embarrassing, urgent situation, they say "Norris Geyser Basin," bringing them back to the panic that ensued thirteen years ago.

"It was so embarrassing," Amies says. "And that was funny."

ERIN MCAFEE
Marian Amies and Bill Kranz have been together nearly 30 years.

On a recent afternoon, Amies now 80, and Kranz, 68, sit at an antique table littered with tea wear and San Pellegrino bottles, just feet inside the front door of their Benton Park home, a converted bakery.

"This neighborhood reminded me of some of the houses in Europe, and so I was always drawn to European influences," Amies says of Benton Park, where she has lived since 1988.

Kranz is a native of St. Louis' north side, and graduated from the old Northwest High School. Back in 1992, he had also written a Person-to-Person ad but says he received no responses. Before meeting Amies, he had only ever been involved in one long-term relationship, something he attributed to being preoccupied, because he was often too busy with his various projects to focus on romantic interests.

ERIN MCAFEE
The two artists have their own spaces for their creations.

"I was really busy working projects and fossil collecting like I do, and [working] in my theater for many decades," he says.

For the past ten years, Kranz has lived in the home with Amies, a retired professor of graphic design at the University of Missouri-St. Louis. After meeting through Amies' RFT ad, the two dated for twenty years before they started living together.

The decor of their home is eclectic, accented with things like hanging strands of origami planes and a church pew converted into a bookshelf.

"This house is sort of so big ... that we each have had lots of working space to do our projects and things," says Amies. "So we never had to fight over space."

ERIN MCAFEE
The couple's Benton Park is filled with their projects.

Over the years, the home has also often housed Kranz's psychedelic black-light theater productions, which have included burning Christmas trees and popping water beds. Water nearly spewed into one of the house's window wells during one memorable performance.

"That's when I had to go to Frazier's and get drunk," Amies says.

Like in any long-running relationship, they haven't always agreed. Amies, for example, found fault in the way Kranz treated his audience at these productions.

"I felt he didn't respect his audience enough," she says. "And so we had ... disagreements about different value systems."

Amies eventually backed off after realizing she would not have wanted anybody to interfere with her creative process, either. They solved their problems like that, working out the occasional issue when one arose, and giving each other room to pursue their interests, often literally.

Because the house is so big, they have their own spaces to do their work and crafts. Living their independent lives — together — for the past twenty years, the two have grown closer to each other, and now want to get married.

Amies and Kranz only started to talk about marriage within the last year and a half. There was no proposal, but rather, they decided together that they would get married.

Aimes says that her relationship with Kranz has surpassed the length of her previous marriage, and when she looks around, that of many others, too.

Being in such a long relationship with Amies, Kranz says it was time for the couple to enter the new "realm of experience" that marriage offers.

Amies views marriage sort of as a symbol of respect to Kranz, to their relationship.

"It's a respectful thing to do," she says. "And I know a lot of people say, 'Well, why bother?' But it just makes a statement, really, that you feel that it's something worth having."

ERIN MCAFEE
Marian Amies and Bill Kranz are now planning to enter "a new realm of experience" in their relationship.

And the wedding, Amies says, is an opportunity to host a great celebration, after the COVID-19 pandemic stopped them from hosting the parties for 50 or so people they would often have at their home in pre-pandemic times.

The wedding, at the Piper Palm House in Tower Grove Park, will be untraditional. There is not going to be a center aisle, but rather the room will be filled with round tables, according to Amies. Also, instead of sharing one big cake, each guest will get their own cake.

"It's gonna be a little bit — a little bit arty," Aimes says. "There'll be great music there. Beatles and, I mean, we both love Beatles."

But the wedding doesn't come without traditional pressures for Amies, who says her age has exacerbated pressure for her to look good.

After the wedding, Kranz says he does not expect much about their relationship to change.

"I don't think it needs to change, except that we'll be finally together, you know, according to the scripture of marriage, you know," Kranz says.

Soon-to-be-weds Kranz and Amies, who met 30 years ago through an RFT ad, and have been going on dates ever since, give some pretty simple advice to new partners: Always have something to look forward to. "This year of COVID stopped all that because we couldn't, you know, go travel, but it's really nice having something always to look forward to," Amies says. "And I think that contributes to a good relationship, too." 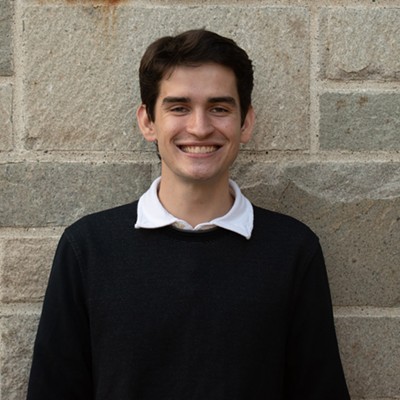