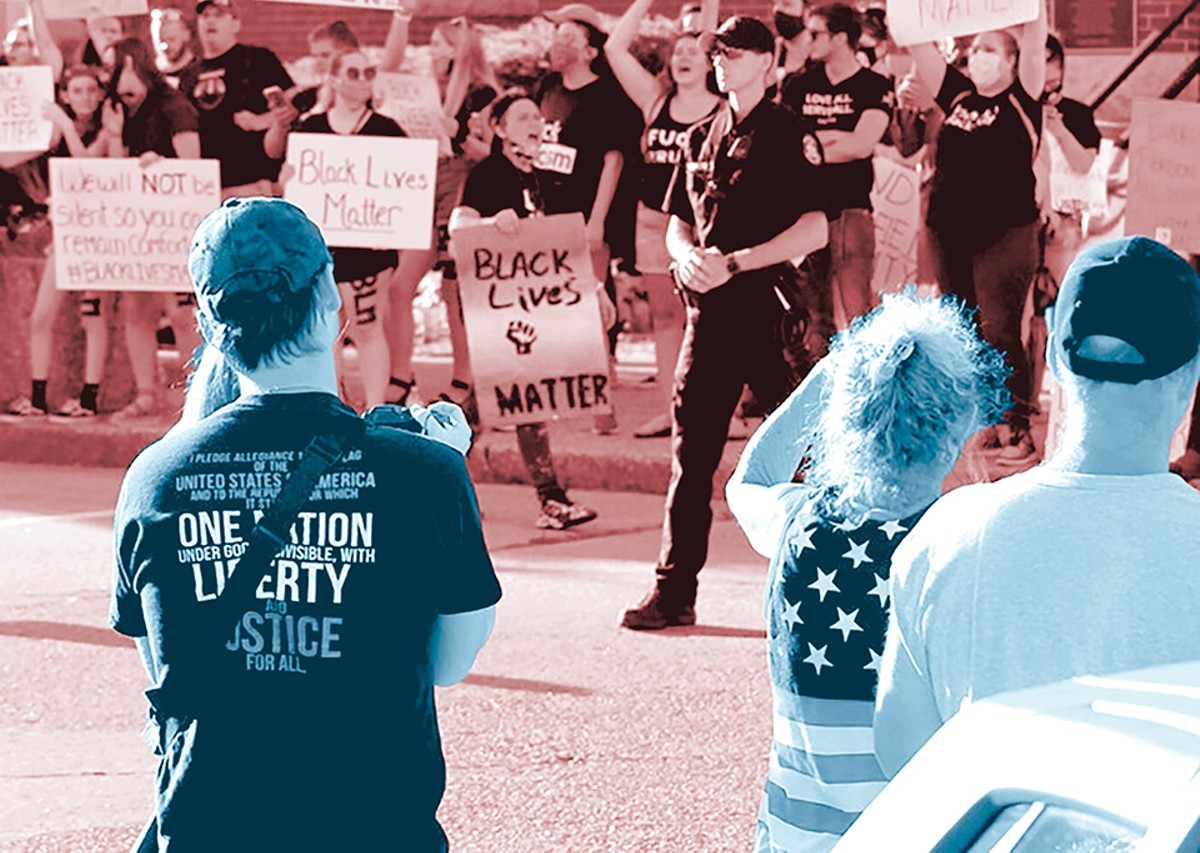 Main Street Memories, a small shop in Fredericktown, is best known as a vintage and antique gift store. But, in a pinch, it can also serve as a perfectly fine sniper's nest.

That's the impression one might get from the scene that played out on the evening of June 24, when a group of protesters aiming to shed light on racism in the small southeast Missouri city were met by a larger group of counterprotesters — many armed to the teeth.

Photos and video from the event show that gun-wielding townspeople were joined by members of the Three Percenters — a group described by the Southern Poverty Law Center as an anti-government militia — dressed in military fatigues and tactical vests. They carried rifles, pistols and zip ties similar to the ones used by law enforcement in lieu of handcuffs. A man spotted on the roof of the antique shop even had a suppressor on his gun.

And on the other side, ostensibly in defense of the protesters, Hawaiian-shirt-sporting Boogaloo Bois, a loosely organized group that believes a second American civil war is impending, carried their own rifles and tactical gear.

Not everyone had guns, though. Some townsfolk brought bladed weapons. At least two arrived on the scene with broadswords. Others wielded two-by-fours.

For Frederick Dorsey Jr., the 21-year-old who had organized the protest, the weaponry was a little much. But it was nothing compared to the blatant racism hurled at him by many of those same armed townsfolk.

"A lot of Confederate flags," Dorsey, whose mother is white and whose father is Black, says of the scene. "And I also saw people threaten to hang me from a noose. A few people were making monkey gestures and telling me I needed to go back to my own community, when I've lived in Fredericktown for sixteen years. I got called many racial slurs. And then my own mother was protesting against me."

In videos, counterprotesters can be seen imitating monkeys and making gestures with their hands that imply hanging by a noose. When Cheyenne Devereaux, a Black drag queen based in St. Louis, made her way over to the counterprotesters' side of the street, a voice could be heard saying, "Whatever that thing is, arrest it."

"You're a drag alright," the man responded, before another man said, "String it up. String it up from the courthouse." 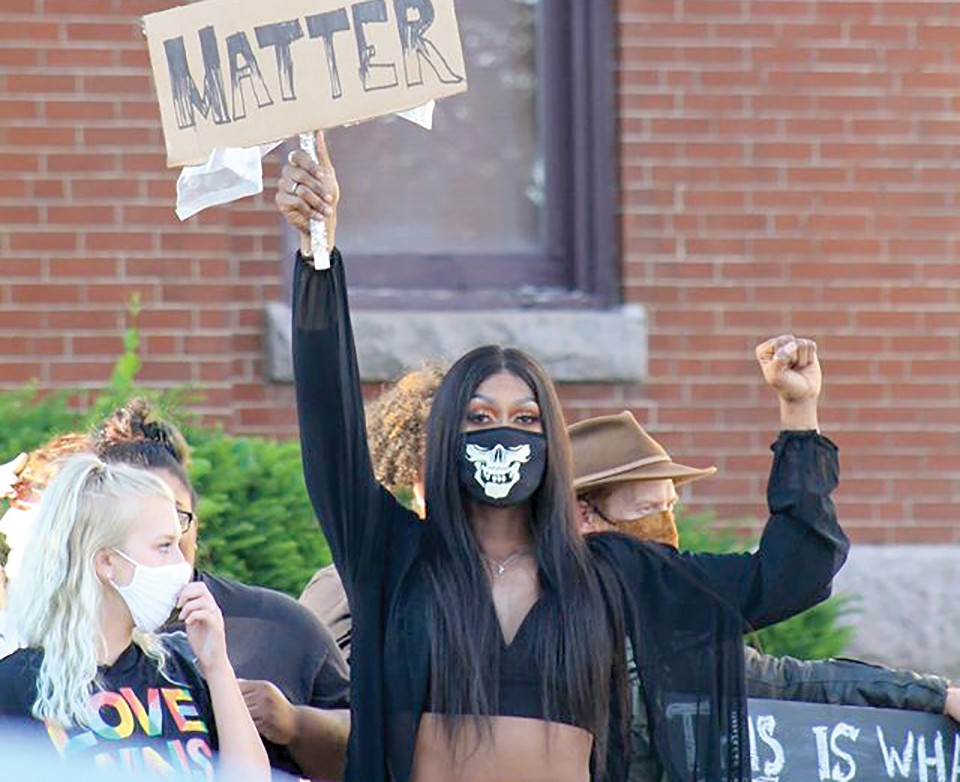 ADAM HAMLIN
Drag queen Cheyenne Devereaux is one of a few St. Louisans that have joined the rural Missouri protests.

Meanwhile, a Jeep circled the scene for upwards of three hours, blasting a David Allan Coe song titled "N*gger Fucker," whose lyrical content is just as reprehensible as its name implies.

Perhaps unsurprisingly, many of the counterprotesters wore Trump apparel and waved flags in support of the president.

"The counterprotest was supposed to be a 'Back the Blue' protest. But it turned into a Trump rally somehow," Dorsey says. "I still don't understand how that happened. [My] protest wasn't even about the police department; it was just to show how racist Fredericktown is.”

It would seem that Dorsey made his point. Still, witnessing his own family shout threats and insults at him was more than a little surreal.

"Me and my mom have never had a close relationship. Before this protest I haven't seen her in several years," Dorsey, who lives with his dad, says. "And she was on the other side, I guess you could call it the Back the Blue, pro-Trump side, saying that I was just doing all this to show my ass, and I'm putting my life at risk and everything. And then my stepdad and his kids said they were gonna kill me because I'm doing all this. He kept calling me stupid and saying I needed to grow up. And I was like, if anything, this is the most grown-up thing I've done.

"I didn't say anything back, because it wasn't worth my time, because I feel like what I'm doing is right," Dorsey adds. "And it's much needed."

Fredericktown is a small city located about an hour and a half south of St. Louis, in the northeastern foothills of the St. Francois Mountains. The town's early history saw it as a mining hub, with mines just east of the city that were, at one point, the largest source of lead in the United States.

It is the county seat of Madison County, with just under 4,000 people and a population that is 96 percent white, according the U.S. Census Bureau. The town contains two elementary schools, one middle school and one high school.

In some ways, Fredericktown is familiar to Adam Hamlin, 34, an independent journalist who was shooting photos at the surreal scene on June 24. Hamlin grew up in Imperial, a similarly small and predominantly white town just an hour north in Jefferson County. He still lives in JeffCo today, but no longer in Imperial. He reasons that his experience gives him a unique view into the racism that can sometimes be pervasive in small-town America.

“I come from a little-bitty town myself. I come from Imperial, Missouri, which is really little. I grew up there most of my entire life, but especially throughout the entire '90s,” Hamlin says. "I know how a lot of these little towns often behave. And I didn't go to these places looking for that, but they definitely haven't hidden it either.”

In the past, Hamlin photographed nature — a far more peaceful affair. But ever since the events of Charlottesville's "Unite the Right" rally in 2017 that ended in the killing of Heather Heyer by a white supremacist who deliberately drove his car into a crowd of peaceful protesters, Hamlin has felt compelled to document protests. He's also trained as a street medic, just in case.

"I figured if I could do anything, I could bring some medic supplies," Hamlin says. “But I could also capture what was happening, so that way there could never really be a question about what's going on."

In keeping, Hamlin has spent years attending and documenting protests across the region — lately, many of them in the small towns in southeast Missouri. He notes that oftentimes those opposed to Black Lives Matter protests in more rural communities claim they don't want to see their towns looted and pillaged — a familiar refrain for anyone who has seen the comment section on a news story in the past couple months. But Hamlin doesn't buy it.

"That's the line that they give — that they are just protecting their community — but it's hard to believe that," he says. "The majority of these protesters that show up in these little rural towns also live there. So they're not looking to destroy anything at all, and I know that the counterprotesters also know that. But the counterprotesters are also the kind of people who generally are gonna have signs on their house that say, 'We don't call cops' or things like that. So they can say that they're wanting to protect their community all they want, but I think that they're kind of looking for a show or something that they can get in on in that manner." 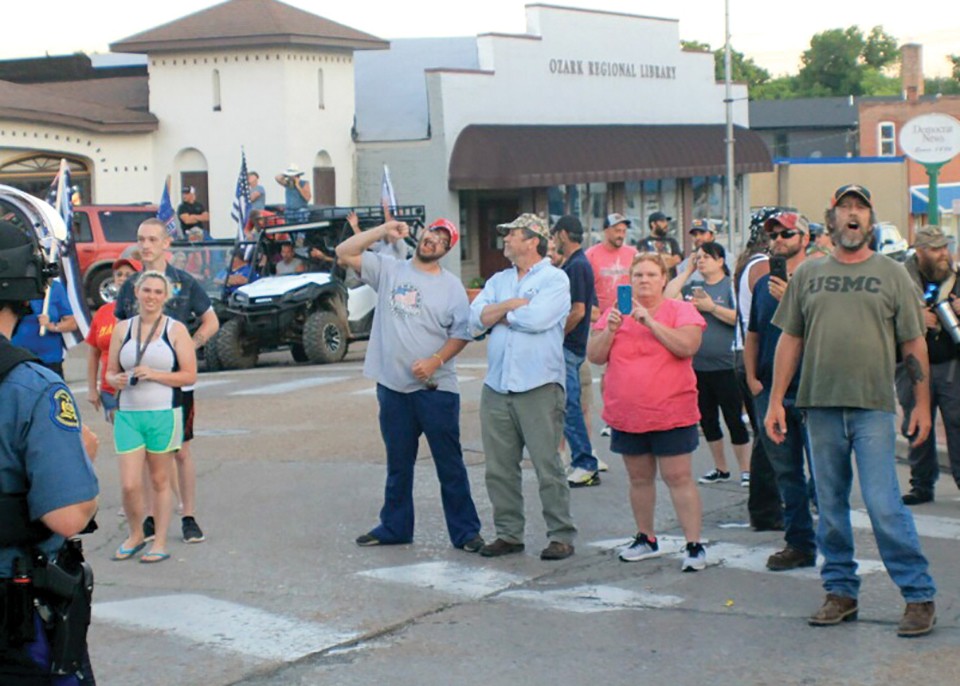 ADAM HAMLIN
Activists at Fredericktown’s June 24 protest were met with racist taunts from counterprotesters, like this gesture graphically depicting the act of lynching.

Hamlin has seen counterprotesters behave in all sorts of ways that don't imply fear or defense, but rather a kind of political theater. At a recent protest in Perryville, he says, a couple drove around for hours with a Trump flag — so long that they had to switch seats at one point — and threw pacifiers at the protesters to imply they were babies. At another recent protest in Park Hills, Hamlin watched a group of protesters get into a car and begin to drive away. Counterprotesters chased the car on foot.

Still, Hamlin says what he saw in Fredericktown on June 24 was the most shocking display he's seen since he got started.

"It was pretty gross, all things considered," he says. "Like, Perryville had an actual Nazi who came out and Sieg Heiled and shouted 'white power' a bunch, and Fredericktown was still worse than that."

At one point in Fredericktown, Hamlin says, a man was shouting threats and taunts so forcefully that his teeth actually flew out of his mouth.

"He went to shout something, but instead of the word coming out, his top fake teeth came out. Like actually hit the ground," Hamlin says. "He just picked 'em up and put 'em back in his pocket."