"It just felt right," Alumbaugh says about partnering with the Fire. "What they're looking for is what we're looking for: the opportunity for players to get better and get experience."

"Chicago is not looking to come in and tell us how to do things," Alumbaugh says. "Some of the other franchises wanted to have a little bit more control. I don't think St. Louis needs that."

St. Louis is often credited as the birthplace of American soccer, and many footy fans are still hopeful the MLS will expand here.

"St. Louis is such an important market in American soccer. It has been and it still is," said USL Pro president Tim Holt when STLFC launched. "Soccer may have been in some state of hibernation here for the past couple of decades. That's going to change."

STLFC has signed five players to the roster so far and plans to announce more new players this month. The first sign-on was Mike Ambersley, a 2001 graduate of DeSmet Jesuit High School, who is returning to his hometown after playing on North American Soccer League teams in Indianapolis and Tampa. 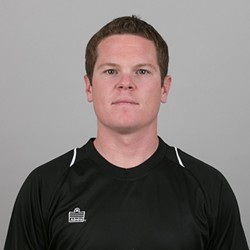 "Given that St. Louis is my hometown, I feel like it's the right time for me to come home and play for Saint Louis FC," Ambersley says. "Not only is it exciting to be able to play in front of family and friends, but it's also exciting to be a part of a club with big ambitions."

The team's new goalkeeper Mark Pais is also a St. Louis native, who split his collegiate career between Saint Louis University and the University of Tulsa, where he was named the team's Defensive Player of the Year in 2012.

"He is the best goalkeeper our country hasn't heard of," says STLFC goalkeeper coach Brian Jones. "Obviously, he won't stay under the radar for long. I expect him to be one of, if not the best, goalkeeper in this league."

The club has also signed defensive player Richard Dixon, who was born in Jamaica and moved to the U.S. as a youth player, Jacob Bushue, a midfielder from Champaign, Illinois, who played at Indiana University, and Kentaro Takada, a midfielder from Japan.

Alumbaugh says STLFC's ties to the MLS through its affiliation with the Chicago Fire boost recruitment of players looking for a professional career in soccer. No players have said they were hesitant to join STLFC after the recent unrest in Ferguson and St. Louis following the fatal police shooting of a black, unarmed teen in August, he said.

Another big factor drawing players to the team is St. Louis' ebullient fan base, which has already connected with recently-signed players to plan post-goal celebrations.

Alumbaugh remembers telling team recruits about St. Louis fans: "These people are going to want you to fight hard for the city of St. Louis and the club. If you do that, the love you get from them will be unbelievable."

The USL Pro season will run from late March to late September, and STLFC will release its final schedule later this month. The team is already renovating Soccer Park in Fenton to get ready for the season.