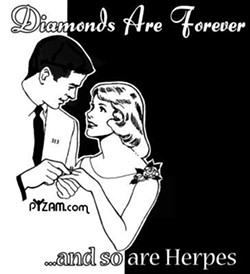 Jade, the nearly three-year-old Asian elephant at the Saint Louis Zoo, recently had another herpes flare up.

The elephant was first diagnosed in February with the disease and underwent a blood transfusion. Then, last month, Jade had another flare up causing loss of appetite and her head to swell.

The Post-Dispatch reports today that veterinarians remain flummoxed as to how Jade contracted the disease that kills some 20 percent of elephants in captivity.

Here at Daily RFT we believe the guilt lies squarely with the zoo officials who named Jade.  Give any child a stripper's name and she's going to come down with herpes at some point in her life. That's just a cruel fact of life.