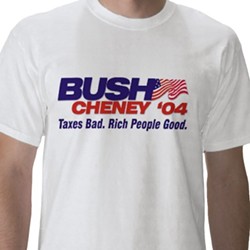 Something like that.
Financier Rex Sinquefield, via his attorneys, filed nine initiative petitions Friday with the Secretary of State's Office calling for the elimination of the state income tax.

Before being placed on the November 2012 ballot, the petitions would require signatures from two-thirds of the Missouri's congressional districts equaling eight percent of the votes cast in the 2008 gubernatorial election. At this point it's unclear which of those nine Constitutional amendments Sinquefield would want on the ballot should he get the signatures, though they each call for basically the same thing.

The state would do away with income tax and replace it with a higher sales tax. The Missouri sales tax currently is 4.225 percent with cities and counties allowed to place additional municipal sales tax on top of the state levy.

Under Sinquefield's proposal, the state sales tax would be capped at seven percent. And given Missouri's budget shortfalls of late, it's likely it will rise to that number. So, how would that impact taxes in St. Louis? Take a look:

According to the Missouri Department of Revenue, St. Louis City has a general sales tax rate this year of 8.5 percent. If the state sales tax rose to seven percent, St. Louis shoppers would pay 11.275 percent on most purchases. And that's if you're not in a special taxing district. A purchase from a Washington Avenue boutique, where the tax rate is now 10.5 percent, would raise the tax to 13.275 percent.

The same is true in St. Louis County. The general sales tax rate there of 6.925 percent would rise to 9.7 percent. And in special tax districts, like Brentwood, would rise from 9.425 to 12.2 percent.