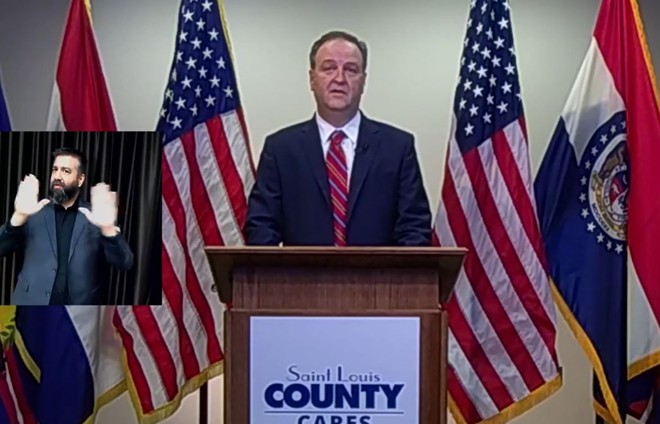 While St. Louis County's "Safer at Home" rules are in place through Christmas, a notable decrease in daily COVID-19 cases means there's a possibility that restrictions on indoor dining could be lifted as soon as early January.

In a press conference Monday morning, St. Louis County Executive Sam Page said the county health department is working with an "informal group of restaurant advisors" to draw up a plan for new restrictions that would allow for "limited indoor dining."

Issued in November as surging cases threatened to overwhelm area hospitals, the Safer at Home order banned in-person dining in bars and restaurants while restricting gatherings to ten people. Although a bloc of restaurants and public officials opposed the move — including a group of businesses that sued Page while asking a judge to allow them to stay open — the safety measures have made a difference, Page said.

During Monday's briefing, the county executive noted that average daily coronavirus cases had jumped from about 140 in early October to 804 by mid-November, just as the new health order took effect. As of Sunday, however, the average daily cases had fallen to 503, Page said.

Page said he expected to release more details on what that plan would look like at some point next week.

With the order in place for the past four weeks, the St. Louis County Health Department reportedly issued dozens of cease-and-desist letters for violations. Earlier this month, the department closed four restaurants and suspended their permits.

Those four restaurants — Bartolino’s South, Final Destination, OT's Bar and Satchmo’s Bar and Grill — were among some 40 businesses that sued to challenge Page's stay-at-home order in November. While the case is still pending, a circuit court judge on November 20 denied the restaurants' request for a restraining order against the restrictions on indoor dining and gatherings.

The restaurants appealed the judgment, but on December 11, Missouri Court of Appeals Judge Robin Ransom similarly refused to reverse it, leaving the Safer at Home rules in place.

After the appeals court ruling, a St. Louis County press release noted that it was the sixth time a court has upheld the legal authority of the county's public health orders since the start of the coronavirus pandemic.