Savage Love: Are My Mind-Blowing Loads Harming Me?

My long orgasms leave me unable to function 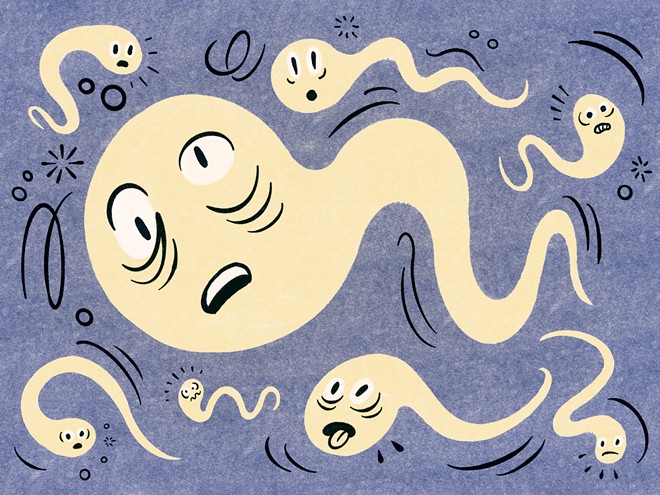 Hey Dan: I'm a 71-year-old gay man married to a much younger man. That's all fine, not relevant so much as just info. Fifteen years ago, I briefly took Prozac. While it dulled my sex drive, the orgasms I did manage to have while taking Prozac were off the charts. I even talked to my doctor about it at the time, and he just sort of shrugged and said enjoy it. OK, fine. But a little more than 15 years later — off Prozac for most of that time (I didn't stay on it long) — my orgasms are still off the charts. My husband's last a kind of normal-ish five-to-eight seconds, but mine continue for a good 30 seconds and leave me unable to function after. Possibly related, from time to time I get a short but slamming headache. I also very rarely experience unpleasant orgasm-related disorientation, like a sense of "déjà vu" that lasts for hours. I have been to a neurologist about this but was offered no explanation. I worry these orgasms might be permanently debilitating to me. Do you think I could be harming myself with these massive, mind-blowing events? I am having sex about twice a week, and they are always like that.

Some people get intense headaches immediately before or after climaxing, and while "sex headaches," as their doctors call them, can be extremely annoying, they're not life-threatening. If you're using Viagra or poppers (which should never be used together), that could be causing or worsening your sex headaches.

As for your other symptoms, a recent study written up in the Times of London could offer some guidance. The study, published in a peer-reviewed medical journal, focused on post orgasmic illness syndrome (POIS), a rare sexual dysfunction that afflicts a tiny percentage of men. Basically, men can become allergic to their own sperm cells, and their own immune systems mount a response to those "left behind" sperm cells that exit the balls but not the body.

"Many health providers do not know about it, let alone the public," the study's lead author, Andrew Shanholtzer, a medical student at Oakland University, told the Times of London. "It is more than likely that it is underdiagnosed, with many sufferers out there."

Seeing as symptoms include feelings of fatigue, disorientation and headaches, along with an assortment of flu-like symptoms, MOANS, it's possible that you're one of those undiagnosed sufferers.

The study details how Shanholtzer treated a younger POIS sufferer whose symptoms sounded a lot worse (and a lot less fun) than yours: a cough, swollen lymph nodes, hives. The use of an antihistamine reduced the severity of this man's symptoms by more than 90 percent. The study will be published in the November 2022 issue of Urology Case Reports ("Post orgasmic illness syndrome successfully treated with antihistamine: A case report," Shanholtzer, et al), if you want to print it out, show it to your doctor and give the recommended antihistamine — fexofenadine — a try. Or, hey, maybe it was the Prozac you briefly took 15 years ago, and an antihistamine won't help.

All that said, MOANS, we all gotta go sometime ... and I can think of much worse ways than being taken out by a massive orgasm in my eighth decade of life.

Hey Dan: I'm a 41-year-old dude who has been monogamously married for 22 years. I know you're doing the math and, no, it wasn't a shotgun wedding. We were high school lovelies who went to college, got our degrees, got married, and established our careers before having two kids. Both our kids, who are still young, have been diagnosed autistic. Needless to say, our lives have become more challenging. About two years ago, my partner fell in love with another woman (X) and asked if we could try polyamory. She asserts that her love for X does not diminish her feelings for me, and that, in part, X represents an escape from life's challenges. I believe her, but that hasn't made it easier for me. I've tried to be as supportive as possible, which has included developing a meaningful, loving and sexually active relationship with X myself. However, the process of settling into polyamory has created more distance between us (me and my wife) than I would like. Further complicating matters, I've developed a strong connection with another woman (Y), and even though Y has strongly suggested the feelings are mutual, she's in a long-term relationship that appears happy and monogamous. I want to tell Y I love her, but I haven't out of respect for Y, her partner and their young kids. I am also nervous about losing Y as a friend. Can telling someone you love them ever go wrong?

You've got a wife, you and your wife currently share a girlfriend ...