Savage Love: My Boyfriend Called Out Trivia Answers During Sex

It wasn't difficult trivia, but still.... 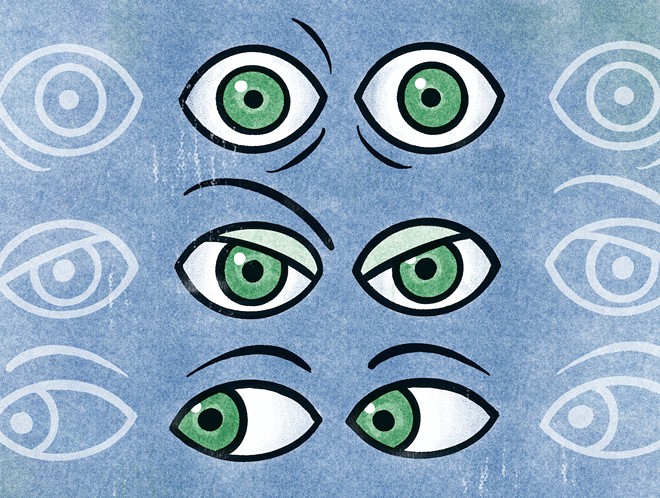 Hey Dan: My husband likes to be naked all the time at home. I think he should cover up when he's in front of the big window in our front room and can be seen from the street, but he says I am being body shame-y. What do you think?

I dated a guy who thought he should be able to walk around in front of his large picture windows at home, naked and sometimes hard (morning wood-y), and he was adamant about it. And then one day the police came and arrested him for indecent exposure. Anyway, you should put up curtains and/or plant some tall bushes in front of those picture windows.

Hey Dan: 44-year-old here who's on the dating scene for the first time in 11 years. A few months ago, I hit it off with a hot, hot guy. Great! My problem/question is about distractions during sex, and I need a sanity check. Once during intercourse, Hot Guy called out an answer to an NPR news quiz that was playing in the background. Is this behavior rude? I'm operating under the assumption that if one's mind wanders during sex, one should at least pretend to be focused.

"Maybe this letter writer should've chosen a more appropriate time for intimate relations — like when This American Life is playing," said Peter Sagal, the host of Wait Wait... Don't Tell Me!, National Public Radio's long-running news quiz program. "Still, I completely understand why the letter writer would be offended by this man's behavior. First, by thinking our show would be appropriate as an audio background for lovemaking — although Bill Kurtis is known, for good reason, as the Barry White of anchormen. And second, the fact that he actually answered questions out loud while in flagrante. But the letter writer shouldn't think he was completely ignoring her to concentrate on us: our questions aren't that hard."

Hey Dan: Been playing with one of my fellow guys recently — I'm a gay guy — who says he's into men, but who absolutely refuses to let me (or anyone else) touch his butt. What is this?

The Ass Ceiling. (It's also a boundary of his, and one you must respect — but you're free to ask him about it. Conversations, even follow-up conversations, about limits, boundaries, and reasonable expectations are not inherently coercive. Wanting to better understand a "no" doesn't mean you didn't hear it and don't respect it. But at the start of a follow-up conversation like that, you need to emphasize that you did, indeed, hear that "no," and will, of course, continue to respect it.)

Hey Dan: I'm a 40-year-old cis het man. For more than 20 years — most of my life so far — I've been obsessed with one woman. We were never a couple, and I haven't had contact with her since my mid-20s. How to get past this? The easiest way would probably be to start a relationship with another woman. Or I could get therapy — but I don't know if my insurance would cover it.

Some days my Instagram feed is mostly memes about how straight guys will do literally anything to avoid getting the therapy they clearly need... and your question brought every one of those memes to mind. I mean, you've been miserable for almost two decades and you can't be bothered to check whether your health insurance covers the therapy you so clearly need? Jesus, dude. Make that phone call, get some therapy, don't date anyone until you've been seeing your therapist for at least a year.

Hey Dan: My husband and I (bio female, newly transmasc) recently became poly. We have created a "closed kitchen table poly quad" with our two best friends. The breakdown is one older married couple, one younger engaged couple, and it's getting serious. We are now talking about moving in together. Any tips on living together for poly newbies? I think we have a chance at making it work long-term, but I don't want to add pressure.

Hey Dan: A date recently tried acting out a Daddy Dom roleplay with me. I don't want to judge, but...