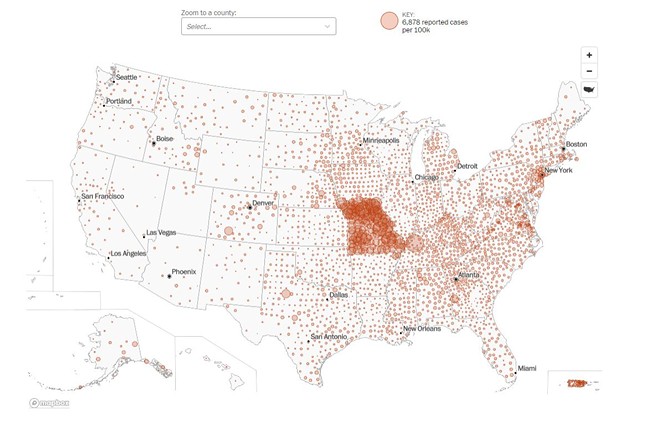 SCREENSHOT VIA WASHINGTON POST
A COVID-19 case map from the Washington Post reflects a dump of misdated Missouri data.

Recent COVID-19 case maps appear to show Missouri as an epicenter of a terrifying outbreak — but it only appears that way because of a March 8 data dump of some 81,000 "probable" cases.

The addition of these "new" cases — which are not actually new — caught some data scientists by surprise. Joshua Weitz, a biologist and professor at Georgia Tech, tells RFT that his research team has "temporarily disabled" the Missouri portion of the popular Event Risk Assessment Planning Tool after its map turned Missouri dark red with risk.

"A large number of cases were added to the state, as a backlog, and assigned one date," Weitz explains. "That led to an aberrantly high-risk estimate, not just in our site, but in other sites that are tracking this."

The risk assessment tool allows users to input the size of a given gathering and to see a visual representation of the "risk level" that one or more attendees will have COVID-19. But Missouri's risk factors got scrambled after March 8. Here's how Missouri previously appeared on the risk assessment site:

The map is an example of what can happen when states change how they report data. Weitz notes that his team had previously grayed-out Iowa (as shown in the above map) when its government temporarily stopped reporting cases by county. Now, Iowa is back on the map, and it's Missouri that's been taken off the board.

One of the first to spot the visually inaccurate Missouri map was Saint Louis University professor Chris Prener, who maintains an independent COVID-19 tracking site.

"This is a consequence of MO releasing data on 50-80k antigen cases," Prener noted on Twitter Monday in a reply to a post about the risk assessment map. "If people don't modify their workflows to account for this, it looks like things are blowing up here. They aren't."

Not everyone has corrected their maps. As of the publication of this story, the Washington Post's COVID-19 map still shows Missouri as a collection of high-risk red bubbles denoting an 81 percent increase in cases over the last seven days, which (again) is not accurate.

The state's addition of the antigen case data represented a long-awaited correction: As the Missouri Independent reported last week, the Department of Health and Senior Service's months-long refusal to document "probable" COVID-19 cases revealed through antigen, or "rapid," testing created a stark disparity between the state's data and what was being reported by local health authorities.

The inclusion of the antigen testing means the state's data hub finally reflects statewide COVID-19 case levels. In a news release quoted by the Missouri Independent, health department director Randall Williams said the use of antigen testing "has greatly increased in recent months."

Williams' statement continued: "Although the rate of community transmission continues to drop significantly throughout Missouri having probable case information available for each county will help guide ongoing efforts to respond to COVID-19."