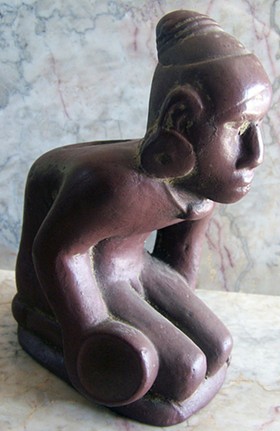 image via
The Chunkey Player Effigy Pipe in question.

The Case of the Missing Eagle Feathers, also known as Kevin Airis's ongoing battle with the Saint Louis Science Center for the return of his family's collection of Native American artifacts, continues. Airis will have his day in the Missouri Appellate Court on January 5. But now Airis believes what he calls "the rotten paper-keeping" at the science center has spread to its neighbor in Forest Park, the Saint Louis Art Museum.

Earlier this fall, Airis and his wife Theresa visited the art museum to check out an exhibit of items from the brand new Danforth Collection, 300 Native American artifacts that had recently been donated by Carolyn Danforth. (Her husband, Donald Danforth, Jr., who died in 2001, had been an avid collector.) They wanted to make sure that none of the Airises' pieces had somehow gotten mixed up with the Danforths'.

Airis didn't recognize anything on display, but he did notice a clay pipe that was on loan from the Whelpley collection at the Saint Louis Science Center.

The information card below the pipe described it as a "Chunkey Player Effigy Pipe" made of flint clay, produced sometime in the twelfth century and excavated more than 800 years later in Oklahoma. It also listed a catalog number from the science center, 12X83.

Airis was pretty sure that the pipe had never belonged to his grandfather, but the fact that it was on loan from the science center made him suspicious. During the discovery process at the beginning of his first lawsuit against the science center, he'd obtained three different catalogs of the museum's holdings: an insurance appraisal from 1979, another insurance appraisal from 1989 and an inventory of Native American pieces for the Native American Graves Protection and Repatriation Act (NAGPRA) in 2001.

"It's sure as heck not the same pipe," Airis says confidently. He explains that pipestone, also known as catlinite, is an extremely rare stone that lies under thick layers of quartz and can only be mined by Native Americans. It's not easily mistaken for clay, he adds. An elbow pipe, moreover, is curved. The figure at the art museum is clearly a kneeling human being, holding a drum.

Via McClure, Frillman explains that the pipe does not appear on the 2001 inventory because it doesn't fit the NAGPRA requirements: it can't be repatriated to the tribe that made it because the tribe doesn't exist anymore. The 1989 inventory was created by an outside firm that wrote its own description, and "elbow pipestone pipe" is a more generic way to describe the pipe. Tests have advanced since then, Frillman adds, and what appraisers in 1989 thought was stone is now believed to be clay.

Frillman doesn't know why the pipe doesn't appear on the 1979 inventory, and since she wasn't working at the museum then, declines to speculate.

View a description of the pipe (object 12X83) from the 1989 inventory and the loan agreement form, both provided by Airis and another from the Whelpley Collection catalog, courtesy of the science center, after the jump.