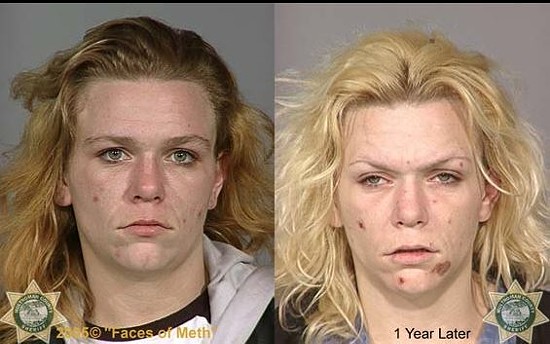 One of the most common misconceptions according to Hart, is that meth causes physical deformities. The meth-mouth addict with two or three pieces of yellowed, decayed teeth is not that way because of meth. In fact, there is "no empirical evidence to support the claim" that meth makes us any uglier than those who take ADD pills.

"Adderall and generic versions are used daily and frequently prescribed each year they are among the top 100 most prescribed drugs in the United States yet there are no published reports of unattractiveness or dental problems associated with their use," Hart says.

Rather, the people we see in those infamous mug shots can blame their lack of photogenic abilities on "poor sleep habits, poor dental hygiene, poor nutrition and dietary practices, and media sensationalism."

Another misconception is the addictive power of meth. But it's not much more addictive than alcohol, with less than 15 percent of meth users become addicts, says the report.

Many anti-meth advertisements convey the perception that one use will result in severe addiction, but these ads have the opposite effect on the communities most likely to use meth, which is white people in rural areas.

methproject.org
There probably has not been many meth users who lost their virginity here, so people laugh at these ads, Hart says.

"These individuals most likely know people who have used the drug, and the information presented in the advertisements is inconsistent with their own knowledge," Hart says. "Here, the parallel is to early propaganda about marijuana and the film "Reefer Madness." The film is now a 'cult classic' because it is widely regarded as a comedy as well as a cautionary tale of official propaganda."

This is not to say that using a lot of meth won't damage your brain. Hart's study doesn't go into the long-term physical effects on the brain, but he recommends two in-depth studies that did just that. In one of those studies, it says "chronic meth users suffer physiological harms, psychosis and cognitive impairments." And in animals chronic use has caused neuro-degenerative effects. See also: Missouri Leads the Nation in Meth Labs (Again)

However, Hart's study does go into the "cognitive effects" of long-term meth use. And there are conflicting studies in regards to how much of an effect meth could have. A flaw in a major recent study compared cognitive effects of users to non-users, but the non-users had a higher education level, which could have had an effect on their better performances.

Other studies have had similar problems, and Hart concludes that: "We are nowhere near being able to distinguish the brain of a drug addict from that of non-drug addict."

Despite Hart's argument that meth is not as bad as we think it is, the law says different.

Meth is a top priority for law enforcement in the Show-Me state and Missouri's Drug Task Force busts a lot of meth labs, including 1,700 in 2012, resulting in many more arrests and property seizures.